Bring it Back! SmackDown's Fist Set

Competition in WWE is grueling. The rigors of the ring can frustrate Superstars – often to the point where they want to put their fist through something. That rush of emotion may have been the inspiration for one of WWE’s most iconic television sets. 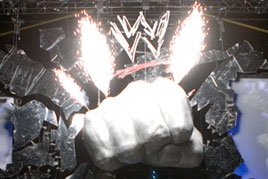 The classic giant fist smashing through a mirror – SmackDown’s set from August 2001 to January 2008 – has long been a favorite of the WWE Universe. That’s why WWE.com is calling for the return of the legendary appendage to Friday nights. (PHOTOS)

How did the fist set come about? Arguably, it was out of necessity. As SmackDown’s second anniversary approached, Rhino Gored Chris Jericho through the show’s original entrance setup at the end of the Aug. 9, 2001 episode, leaving WWE with the daunting task of coming up with something new in a hurry. One week later, the huge fist debuted, and quickly made its way into arenas across the country – and into the hearts of the WWE Universe. 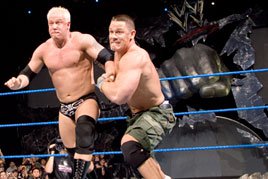 Unfortunately, when WWE went high-definition in January 2008, the organization opted to wave buh-bye to its five-fingered friend. Granted, today’s set is visually stunning, and helps make Raw and SmackDown must-see each and every week. Yet few can deny that the fist-and-broken-glass truly gave the show an attitude that equaled the explosive nature of SmackDown and its matches. Just imagine how it would look in high-def.

Think of all the Superstars that have made their way to the ring from that iconic set. Who can forget Rey Mysterio leaping out from under the stage to make his WWE debut? Hall of Famers like Hulk Hogan, Edge and “Rowdy” Roddy Piper, legendary icons like The Undertaker and the Superstars of today – including  John Cena and Chris Jericho – have all emerged from under the clenched fist to the roar of the WWE Universe. It would have a tremendous impact on today's up-and-coming ring warriors, helping them project an even more powerful, larger-than-life image of themselves. 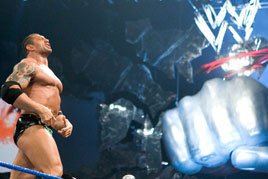 In addition to adding to SmackDown’s intense atmosphere, the fist set could also be practical, helping out any Superstars that choose to take the high ground. In September 2004, Heidenreich shocked the WWE Universe by climbing atop the massive set. As his manager, Paul Heyman, and WWE officials begged him not to jump, the unusual Superstar pulled out a microphone, using the moment to read a poem. Just imagine what some of today’s high-flyers could do with the added height. Justin Gabriel or Kofi Kingston would look like Superman, flying through the air from the top of the enormous appeandage, and crashing onto a helpless opponent.

SmackDown is exciting, unpredictable and action-packed. It deserves a set reflecting that absolute adrenaline rush. Bringing back the classic fist would surely be an instant knockout from the moment a Superstar emerged from underneath it.

LA Knight gets the AJ Styles rub with phenomenal return