Where Are They Now? Vader, Part Three

This is the part of the story where Vader becomes Leon White again and it isn’t pretty. For the better part of three years, the big man went through hell. After quitting his ill habits cold turkey, he had a double knee replacement, which became infected and forced him into bed for six months. After that, he attempted to take a trip to Japan for an autograph signing and went unconscious on the plane. Vader was in a coma for the next 30 days. When he awoke, he had lost 112 pounds and struggled to walk and talk again, but, for Vader, this was the moment of his rebirth.

“Did I really think that after misbehaving for so many years that I was just going to quit and go through a couple of weeks of misery and be done with it and be healthy and happy?” he said. “For me, that didn’t make sense. If you want to get your life back this is what you have to do.”

If Vader sounded introspective, it’s because he’s told this story before. After returning to Colorado following his coma, White was put in touch with a group called the Wounded Warriors Alliance. Founded by Dave Roever — a veteran who was severely wounded and disfigured in the Vietnam War when a grenade exploded in his hand — the organization provides courses in public speaking, spirituality and physical rehabilitation to soldiers who have been hurt in combat. “The U.S. military sends me these guys with no legs, so I can get them back on their feet,” is how Roever once put it. (PHOTOS)

Although the Alliance was designed for military veterans, the group heard White’s story and recognized him for what he was — a wounded warrior. He was invited to attend a program at their ranch in Pueblo West, Colorado. The experience changed his life.

“These beautiful people allowed me to come into their program and they taught me how to give my testimony — that’s what has value,” White said.

Since completing their course, Leon has become a speaker and a counselor with the faith-based group (White, himself, is a born-again Christian), sharing his story with the young men and women who have survived the horrors of war and are now scarred both physically and mentally. 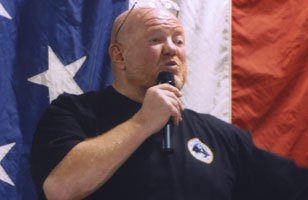 “These guys may have one arm or one leg, may have been shot in the shoulder or the chest two or three times,” White said. “What I do with these kids is I stand up in front of them and tell them that throughout my career, I’ve had 45 surgeries to date, I’ve had 19 concussions, I’ve had both knees replaced, I’ve actually been in a coma for 33 days in Japan.

“If this old man can do what he did and come out on the other side and actually be here tonight,” he added, “then what can someone do at 23 with their whole life ahead of them?”

In addition to his motivational speeches, the former champion also helps the warriors with physical rehab, training them in the gym with a program that White developed himself. It’s meaningful work that has given Leon purpose again and helped him restore the relationships in his life — specifically the one with his son, Jesse.

“Jesse’s the love of my life without question,” an emotional White said. “I certainly hadn’t given him very much to be proud of for a long time. The person and friend and father that he sees now is substantially different from the person I was at the end of my career.”

A powerhouse like his father, Jesse was a football star at the University of Oklahoma before a hip injury halted what could have been an NFL career. He transitioned to the squared circle after that, competing in Japan for the company his father recently started — Vader Time Promotions. In 2011, he signed a developmental contract with WWE.

On the day of this interview, White was preparing to see his son off as Jesse started the long drive to Tampa, Florida to begin training. The dad couldn’t have been prouder.

Jesse’s got my strength, but he’s as good looking as anyone WWE’s ever had,” White added. “I married well. What can I say?”

He talked at length about his son’s future in the ring, but when asked about his own, White was sheepish. It was clear his passions have changed. Although he admitted to being in better physical shape than he was during his time with WWE, White managed to shift the subject back to his work with the Wounded Warriors Alliance.

“When you reach one of these kids, it’s like the feeling of going into that match with Stan Hansen in front of 77,000 people multiplied by 10,” he said. “For one of those kids to say, ‘If he did it, I can do it.’ That’s what it’s all about.”