Where Are They Now? Corporal Kirchner, Part Two

First popularized by Atsushi Onita’s Frontier Martial-Arts Wrestling in the late ’80s, the hardcore style — often dubbed “garbage wrestling” by fans and critics alike — was built around vicious bouts known as “Death Matches.” Characterized by rampant use of dangerous weapons like wooden planks spiked with nails and barbed wire laced ring ropes, these no holds barred brawls were gory, destructive and hugely popular. For years, promoters could pack an arena with the promise of gruesome action and if a competitor was willing to step into this treacherous environment, he was assured a solid payday.

Gruff and fearless, Kirchner was more than ready to take on Japan’s most twisted competitors in the sickest matches imaginable, but he didn’t think his patriotic persona was intimidating enough for this depraved underworld. A film buff, he realized that the bad guys in scary movies would be the perfect fit for these horrific matches and based his new persona around Leatherface — the hulking ghoul who terrorized a group of teenagers in Tobe Hooper’s 1974 classic, The Texas Chainsaw Massacre. Modeling his look and behavior on the character, Kirchner became an intimidating presence.

“I was an actual living monster,” he plainly stated. (PHOTOS)

He was treated like one too. Wearing a mask of mock human flesh and a butcher’s apron soaked in viscera, Leatherface entered the ring through the crowd with a live chainsaw in his hands and chased down fans with the wild intensity of a horror movie villain. Audiences loved the excitement of it all, but their fear could be very real. Once, a woman leapt off a balcony to get away from him. Another time, a man had a seizure amid the pandemonium.

“Liability wise, I couldn’t get away with it in the States,” Kirchner admitted. “Over there, I didn’t have that problem. I scared people and they liked being scared and showing that emotion.”

The Grand Guignol appeal of the Leatherface persona quickly made Kirchner one of the most marketable competitors in the country. For the next 12 years, he regularly flew 7,500 miles from his house in Florida to Tokyo, Japan where he yanked a rubber Halloween mask over his head, fired up a chainsaw and subjected his body to the horrors of baseball bats wrapped in barbed wire and rings littered with thumbtacks. 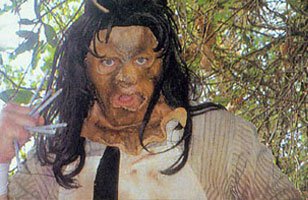 It wasn’t something Kirchner had to do. In the early ’90s there were opportunities for a man of his size in places like World Championship Wrestling and Puerto Rico’s World Wrestling Council. Financially, Kirchner could’ve made more cash tag teaming with Firebreak Chip on WCW Saturday Night than he did for getting slammed in broken glass on the other side of the globe. So why did he do it?

“I think originally guys make the decision based on the money,” hardcore icon Mick Foley told WWE.com, “but when they end up excelling in that environment like Mike [Kirchner] did, it’s because there is part of them that does not hate it.”

Sports-entertainment’s most famous daredevil, Foley built his reputation as a fearless brawler through a series of shocking wars against Terry Funk across Japan. Still, even the man who once competed in a ring rigged with C4 explosives was shocked by the cruelty he witnessed in some of Leatherface’s matches — even describing a particular battle as “obscenely brutal” in his 1999 autobiography, “Have a Nice Day!”

“I don’t think it was a big stretch for Mike to be [Leatherface],” Foley said.

This part of his career was worlds away from his heroic, army man days in WWE, but Kirchner wasn’t evil or sadistic (Foley described him as a “nice guy” in his book). He was just intense. Looking back on his reckless Japanese years, Kirchner sounded almost gleeful, describing barbed wire massacres as “fun” and “truly a joy.” It’s shocking to hear, but not surprising. Since his teenage days as a paratrooper, the Corporal craved animal excitement and the thrill of risking his body in something like a Double Hell Death Match gave him the same adrenaline rush that jumping out of an airplane did years prior.

Kirchner’s only problem was that he could be too intense. One night, while out with pals in the popular nightlife district of Japan known as Roppongi, he got into an altercation with a Japanese man who was harassing one of his friends. After words were exchanged, the 250-pound Kirchner smashed the guy in the jaw and literally broke his face. Although he insists the punch was thrown in self-defense, the competitor was still sentenced to four months in prison.

“It was a very humbling experience,” Kirchner said of his time behind bars. “You weren’t allowed to talk, you sat on the floor all day. You get inside your own head and realize how lucky you are with the things you do have.”

Kirchner may have said he was humbled, but he showed no signs of it when he returned to the ring as Leatherface later that year. In his first bout back after his time in prison, he competed in a Bed of Nails Death Match that was so vicious it resulted in him being fired by the company.

“He was actually too hardcore for the hardest-core wrestling promotion in the world,” Foley said with a bit of disbelief.

Again — just as his time in prison had done — the firing further added to the Leatherface mystique. Immediately, he was hired by hardcore originators FMW who introduced Kirchner as the new and improved Super Leather. The name may have changed, but the insanity was the same.

“As notorious as I was for spending four months in the monkey house and getting fired, they were glad to have me and I went and rock and rolled with them.”

Super Leather was a big hit in FMW for six years, but by the early part of 2000, the hardcore style was on the decline and promoters were less willing to fly foreign talent across the world for a few matches. Now in his early 40s, Kirchner knew that his time in the ring was coming to an end and he was more than ready to put his chainsaw away.

“I spent so much time away from my family,” he said. “They were ready for me to come home.” 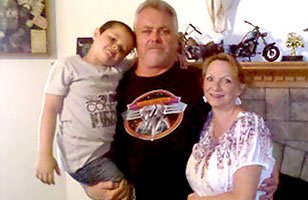 Leaving behind the madness of his 12 years in Japan, Kirchner moved his family to a quiet country home in North Carolina and took on a job as a long haul truck driver. An avid traveler, the man who once terrorized fans as Leatherface enjoys the peacefulness of a lengthy trip across the country. (PHOTOS)

“I have to say I enjoy it a lot,” he said from the cab of his big rig. “Every once in a while I see a WWE truck and I smile and remember when.”

His hair grayed and his scars faded, Kirchner has clearly mellowed since leaving the ring. When not on the road, the big man enjoys relaxing pursuits like restoring military weapons and raising bloodhounds. He also cares for two horses on his three-acre property where he lives with his wife, Tina. Married since 1996, the couple has four adult children and four grandchildren.

“That’s my greatest accomplishment in life right there — that I’m still here to enjoy them and be a good grandpa.”

The sweetness Kirchner has when talking about his grandkids may explain why he hasn’t slipped on the Leatherface mask in some time. Still, with various competitors ripping off his horrifying persona, it would seem like he’s a regular on the independent scene.

“Numerous people have put on the mask and taken credit for my work,” Kirchner revealed. “It’s kind of honor actually. I must’ve done something right.”

Living the full life he does, Kirchner has remained out of the public eye for much of the past decade — except for a regrettable incident in 2006 when false reports of his demise surfaced on the internet. Fortunately, the former Superstar took the blunder with good humor.

“The funny part is my phone started ringing and someone would say, ‘Michael, are you okay? They said you’re dead!’” he remembered. “Well, if I’m dead would I be answering the phone?”

Funny and kind, it’s hard to believe Kirchner once powerbombed a man onto a bed of nails. That’s not to say he regretted that incident or any other part of his unique career. Proud of his ring work, he even admitted to occasionally popping onto YouTube when he wants to remember his days as Leatherface or the Corporal.

“The other day I watched me and S.D. Jones against Big John Studd and King Kong Bundy and it just brought back good memories,” Kirchner said. “It feels like a lifetime ago, but it was a lot of fun.”