Where Are They Now? Corporal Kirchner

He’s remembered as a patriot, an all-American good guy who defended his country’s honor against loathed Russian villain Nikolai Volkoff at WrestleMania 2. But there’s a dark side to the career of the man known as Corporal Kirchner that many WWE fans don’t know — a decade spent in the vicious world of Japanese hardcore wrestling under the name Leatherface, brawling his way through the most brutal matches ever witnessed.

From a truck stop in Tennessee, Mike Kirchner reflected on each of his personas as if they were long lost friends.

“I loved both of them,” Kirchner told WWE.com during a lengthy phone conversation. “[Corporal Kirchner] was so much fun, because you’d learn from so many guys. But Leatherface was just hardcore joy.” (PHOTOS)

Different as they may be, Kirchner’s alter egos had one thing in common — toughness. It was a reputation he carried with him throughout his career and something that was ingrained in him since his schoolyard days. By his own account a rebellious kid, the Chicago native grew up a scrapper — the result of a childhood spent moving from town to town. His no-nonsense attitude could have sent him down a bad road, but at 17 he joined the military and learned discipline.

“It was the end of the Vietnam War,” Kirchner said, “so the guys who were training me were combat vets who taught me how to take things seriously.”

Enlisted as a paratrooper with the 82nd Airborne Division out of Fort Bragg, North Carolina, Kirchner spent the remainder of his teenage years leaping out of airplanes and training for intense combat situations. He never went into battle, but the young corporal gained the mental and physical tenacity of a soldier.

He left the military in his early 20s and headed to Minnesota where he worked mornings at a machine shop and bounced in local bars at night. Whatever free time he had in-between he spent in the local gym, which is where he met Hulk Hogan. Not yet 30 at the time with his silky blond hair just beginning to thin, Hogan was a few years out from making history with WWE, but he was still a major star in Verne Gagne’s American Wrestling Association.

With his fame rising, Hogan would brag to his gym buddy between sets about his latest trip to Japan — the competition, the women, the money. Immediately, Kirchner was hooked.

"That’s what lit the fuse,” he explained.

With The Hulkster’s help, Kirchner gained entry into one of Gagne’s storied training camps, but the WWE Hall of Famer wasn’t overly impressed by his rough new recruit. Undeterred, the hopeful headed down to Florida — the territory where Hogan first broke in — and began paying his dues in smaller, regional promotions.

“I really put my heart into it,” Kirchner said, “and I did well.”

Competing under the name R.T. Reynolds, Kirchner eventually began to get bookings in WWE through contacts he’d made down south. He rarely fared well in these early matches, routinely getting banged around by veterans like Blackjack Mulligan and The Junkyard Dog, but he’d eventually catch a break.

At the dawn of 1985, the very popular Sgt. Slaughter had just left the company over a dispute surrounding his involvement with G.I. Joe. It was an unpleasant situation, but it created an opening for a patriotic hero that a military veteran like Kirchner was more than capable of filling.

“I got a tremendous opportunity,” Kirchner said looking back on his WWE days. “It was a dream come true.” 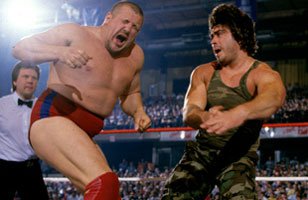 Making his debut after a series of vignettes that showed the Corporal jumping out of a jet and emerging from a lake with a knife in his teeth, the staunch American naturally entered into a rivalry with The Iron Sheik and Nikolai Volkoff, a hated tandem who had earned the ire of the WWE Universe through their anti-American rants. (WATCH) For the better part of a year, Kirchner battled his enemies from the Boston Garden to the Los Angeles Sports Arena, culminating in a showdown with Volkoff at WrestleMania 2 in the spring of 1986.

“Nik could pick me up like a kid back in the day — over his head like nothing,” Kirchner said with a laugh. “He could put you in your place in a second, but that night was tremendous.”

The Corporal was victorious at WrestleMania 2 — perhaps the biggest win of his career — and experienced more success throughout 1986, regularly teaming with Superstars he'd watched on television as a boy.

“Tagging with Bruno Sammartino or Pedro Morales or Ricky Steamboat was like, ‘Wow!’” Kirchner admitted. “Every night was exciting.”

The powerhouse continued with the company for nearly a year, but personal problems and a messy divorce led to Kirchner requesting his release in 1987. It was an ugly time in his life, but he still remembers his WWE days fondly.

“I had a blast,” Kirchner said. “It was an honor to be able to work with the greatest of our time there. I’ll always be thankful for that.”

After taking some time to get his life together, Kirchner got back in the ring, spending a few months in Stu Hart’s Stampede Wrestling promotion before “Cowboy” Bob Orton put him in touch with Antonio Inoki’s New Japan Pro-Wrestling. At the time, sports-entertainment was massively popular in Japan and American grapplers — known colloquially as gaijins — were in high demand. Over the course of a two or three-week tour, an American could earn far more than they would for months of work in the United States, leading many great competitors to make the journey overseas.

“The talent that they brought over there was tremendous,” Kirchner remembered. “We had Vader, Bam Bam Bigelow, Scott Hall. But they liked bringing in different guys, so it wasn’t a steady gig.”

New Japan may have dried up quickly, but Kirchner liked the country and there were other options for a man with his skill set.

“A couple of independent companies were starting to do well,” he remembered. “The only catch was you had to go hardcore.”