Where Are They Now? Dean Malenko, Part Two

On Jan. 16, 2000, Dean Malenko was finally ready to quit World Championship Wrestling and he was not alone. According to Malenko, there were at least 20 competitors ready to join him in the mass exit. But the closer the group got to the management offices, the smaller the crowd became.

“Every time I looked over my shoulder, somebody darted into another room," Malenko laughed. "By the time I got to the door, there were about seven of us, but I didn’t care. It wasn’t about them — it was about me.”

The group, which included Eddie Guerrero and Perry Saturn, was tired of WCW’s corrupt politics and rampant mismanagement and together they demanded their releases from Senior Vice President Bill Busch. The executive balked at first, but eventually gave in. It was a huge move. Suddenly, a handful of WCW's brightest stars were free agents and it wasn't long before WWE signed them to contracts. Within two weeks, Malenko, Saturn and Guerrero debuted on Raw.

For Malenko, it was a homecoming of sorts. In the mid-80s, he had actually worked as an official on various WWE shows, including a Saturday Night’s Main Event where he kept order in a bout between “Macho Man” Randy Savage and George “The Animal” Steele. But what was more important to Malenko was the ability to work in a positive environment.

“I was making a lot more in WCW only because Eric [Bischoff] was nice enough to spend [Ted] Turner’s money,” Dean admitted. “But my biggest goal was to make sure I finished out my career with a company that took the business seriously.”

The Iceman competed in WWE for the better part of two years before retiring and had some memorable moments during this relatively brief run. He held the Light Heavyweight Championship for nearly a year, competed at WrestleMania 2000 and even had a series of unique intergender matches with Divas like Lita and Chyna.

“It was fun with the girls,” Malenko said. “It wasn’t fun trying to explain to my wife at home, but I had a good time with it.”

By no means a main-eventer during his time in WWE, Malenko was always a gifted performer who could steal a show against an opponent like Scotty 2 Hotty or Essa Rios. Still, he knew when it was time to walk away from the ring and in the summer of 2001 he did just that. Dean has not competed since.

“I never wanted to be one of those guys that had to go back to hear the roar of the crowd or collect another paycheck,” Malenko said. “In my mind, I did everything I wanted to accomplish.” 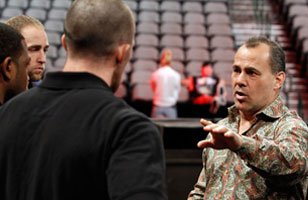 Truth be told, The Iceman did not get very far when he decided to walk away from the ring. Immediately upon his retirement, the veteran was hired by WWE as a producer. In this role, he's looked upon to draw from his life in sports-entertainment in order to educate and instruct the young Superstar of today. (PHOTOS)

“That was a little bit of an odd transition, because after 20 years of going to the arena with my tights and boots now I’m going with a pen and a notepad,” he admitted. “But I’m really happy I did it.”

Working alongside fellow greats like Arn Anderson and Mike Rotundo, Malenko keeps a close eye on blossoming Superstars like Evan Bourne and Yoshi Tatsu and gives them advice on how to improve. If there's a video in WWE's library that will help them, he'll recommend it. If there's a maneuver that would work well in their arsenal, he'll show them how to hook it on.

“There are a lot of young, talented guys with good heads on their shoulders,” Malenko told WWE.com. “It’s part of my responsibility to take these guys and guide them in the right direction.”

It's a responsibility the former United States Champion takes very seriously. For Malenko, it's not just a job. He sees it as his duty to carry on the legacy of the great sports-entertainers he's known in his life, from his father to his brother to his friends like Eddie Guerrero.

“I feel responsible to give back,” Dean said. “I need to know that 10 years from now that this business is still intact and that I didn’t work for 20 odd years for nothing.”

Outside of his current role with WWE, Malenko spend his free time with his wife of 15 years and their three children. Since his heart attack last November, his family is even more important to him than ever.

“I thank God that I was able to go home and see my kids,” he said.

Although his health problems were serious, Dean did not take much time off before returning to work and has been doing well ever since. He’s started on a healthier diet and checks in regularly with his doctor, but the biggest change to his lifestyle has simply been the way he approaches the day.

"I kind of look at things a little differently," he said. "I really appreciate life."