The nWo took WCW by storm. They broke all the rules and, clad in black and white, they wreaked havoc each and every week. As a result, WCW began to overtake WWE in television ratings. Viewers tuned in to see what the nWo would do next, and to also see who would attempt to take them down. In addition, WCW Monday Nitro began to air for three hours, with the first hour taking place before Monday Night Raw and featured the fast-paced action and high-octane style of lucha libre and cruiserweights.

Not only had WCW reinvented itself with the emergence of the nWo, but one of their most loyal competitors also went through a memorable transformation. The bleach-blond, charismatic and face-painted "franchise" of WCW, Sting, became a silent and mysterious figure, lurking in rafters always ready to strike at the nWo. Fans were captivated by Sting's new attitude and whenever the nWo caused trouble, Sting would often descend from the arena catwalks and quickly disperse of all members of the New World Order, taunting Hogan until their confrontation at Starrcade 1997. 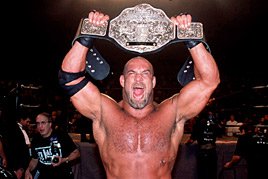 As Sting battled Hollywood Hogan and the nWo, WCW fans also began to take notice of a new competitor who was taking out everyone in his path. From his very first match against future “Tough Enough” trainer Bill DeMott (Hugh Morrus), Goldberg let his actions do the talking and he embarked on one of the most epic undefeated streaks in sports-entertainment history, one that is topped only by The Undertaker's WrestleMania streak. Armed only with a question, "Who's Next?" Goldberg was powerful and proved his clout when he executed his trademark Jackhammer on the 500-pound Big Show (then known as The Giant). Eventually, Goldberg would shock the entire world by handily defeating Hollywood Hogan for the WCW World Title in front of his hometown crowd in Atlanta.

Just as WCW seemed relatively unstoppable, a wave of new faces in WWE started to grab the attention of fans all over the world. "Stone Cold" Steve Austin, The Rock and Triple H each embarked on their own unique journeys to the pinnacle of sports-entertainment and many viewers, including those loyal to WCW, decided to join them on their respective quests. Whether it was "Stone Cold" going after Mr. McMahon, The Rock unleashing a verbal tirade, or Triple H and D-Generation X declaring "war" and actually invading WCW, WWE had become refreshed and exciting, while the competitors of the ‘80s and ‘90s remained on top in WCW, reportedly keeping young and new stars from being successful. Even splitting the nWo into two factions —  Wolfpack, led by Kevin Nash and Hollywood, led by Hulk Hogan — did not make up for the lack of new competitors achieving success in WCW.

In an attempt to stop WWE's momentum, on Jan. 4, 1999, WCW attempted to give away the results of the WWE Championship Match, insulting new WWE Champion Mankind in the process. That very same night, Nitro's main event was WCW World Champion Kevin Nash against a returning Hollywood Hogan, finally pitting the leaders of the nWo factions against one another. In what became known as "The Fingerpoke of Doom," Hogan poked Nash in the chest, Nash fell straight back and allowed Hogan to pin him to win the WCW Title. The moment signified the reunion of the nWo, but also the moment when many fans permanently changed the channel back to WWE. 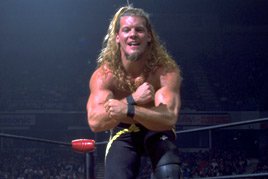 With WCW seemingly moving backward instead of forward, many of the young athletes in Turner’s organization saw the success of "Stone Cold" Steve Austin, who had once been among the ranks of WCW, and they felt could achieve more away from the shadow of the nWo and the older WCW stars. As a result, one of the most crucial blows to WCW came during Monday Night Raw on Aug. 9, 1999, when former WCW Cruiserweight and TV Champion Chris Jericho interrupted The Rock, announcing his presence in WWE. Jericho, who would never have an opportunity to challenge for the WCW Title, would go on to become a multi-time World Champion as well as WWE's first-ever Undisputed Champion — thus, the last recognized WCW Champion.

Shortly after Jericho's debut, other talented ring warriors such as Eddie Guerrero and Dean Malenko would debut in WWE, only a week after they left the Atlanta-based brand. Malenko's departure was pivotal because of his past standing as a member of WCW's longest-running faction, The Four Horsemen.  From there, WCW began to spiral out of control. Many of the young and talented stars had moved to WWE to begin much more successful careers, while WCW failed to reinvigorate their own identity.

The year 2000 was met with a number of perplexing decisions by WCW management. There were failed attempts to once again reboot the nWo, trying to become more risque than WWE backfired and a full reboot of the entire product further removed fans from the brand. None of these measures could stop the ratings slide of the once mighty WCW. At this point all bets were off and the once prestigious WCW Championship was ultimately disgraced when movie star David Arquette shockingly won the title.

While the WCW title did regain some of its stature following Arquette's reign with champions such as Diamond Dallas Page and Booker T, the company was unable to recover. Finally in 2001, WWE acquired WCW, officially ending the Monday Night Wars and declaring WWE the undisputed champion of sports-entertaiment. 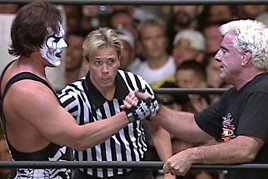 The final Monday Nitro aired on March 26, 2001, and was headlined appropriately by two of WCW's most respected competitors, longtime rivals Sting and Ric Flair. As Nitro was simulcast with Monday Night Raw and Mr. McMahon prepared to address the WWE Universe on his latest acquisition, WCW fans were treated to one last night celebrating what WCW was, rather than what it had become.

"The Rise and Fall of WCW" on DVD is available now at WWEShop.com.