Bring it Back!: Classic Cages

With a monumental WrestleMania Hell in a Cell Match between The Undertaker and Triple H looming large on the horizon, the entire WWE Universe has cold, hard steel on the mind. And while nothing may compare to the most intimidating structure in WWE history, perhaps the buzz of metal madness on The Grandest Stage of Them All will inspire WWE to bring back past steel cage incarnations into the main event fold. (PHOTOS) 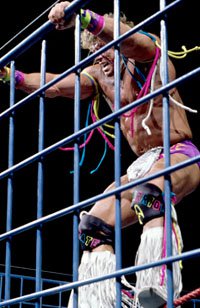 Classic blue steel
For members of the WWE Universe, there’s something familiar and, dare we say, comforting about that classic blue steel cage from the late '80s and '90s. Made famous at WrestleMania II and on Saturday Night’s Main Event, the blue steel is an undisputed classic image. Being morphed into everything from video games to your official circa-1990 WWE ring play set, those blue steel bars are instantly recognizable as a WWE original. And while the chunky blues may evoke warm and fuzzy feelings of nostalgia by fans, it’s a safe bet that those sentiments are not shared by the Superstars who have done battle inside that same sapphire structure.

Designed primarily for climbing, the bars were sturdy and well built, and when a Superstar was launched into them, the blue steel won every time. Still, because of the ample foot-space allowed by the bars, launching off the top of the cage was just one of the many reasons we want to see this match brought back. We get chills just thinking about watching Tamina — whose father, WWE Hall of Famer “Superfly” Jimmy Snuka, made cage-diving a thing of legend in his day — follow in her dad’s footsteps and leap off the top of this blue beauty. 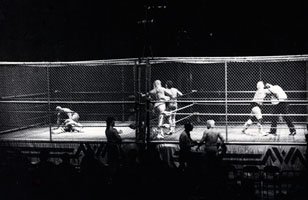 Let the (war) games begin
In 1987, WCW’s Great American Bash incorporated “WarGames: The Match Beyond” into competition. Featuring two teams and timed intervals, WarGames sure was fun to watch. A bevy of legendary competitors have experienced the match’s unique side-by-side double-cage structure. And after all team members were inside the steel enclosure, the “Match Beyond” would begin, where the ways in which to win were simply stated, but brutally applied — submission or surrender. This type of match is seemingly tailor-made to add a new twist on the traditional Five-on-Five Tag Team Match at a present-day Survivor Series. 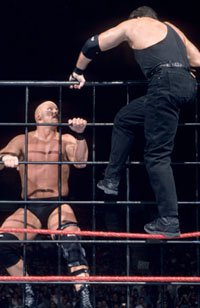 Paint it, black
A wicked twist on the old-school baby blue cage was added at St. Valentine’s Day Massacre in 1999 in the midst of “Stone Cold” Steve Austin's personal war with Mr. McMahon. A microcosm of the massive rivalry between The Texas Rattlesnake and his employer, the match itself featured standard cage rules. But, the black bars made everything different somehow. Like some kind of weird, inverted idol, the black bars took something beloved from our past and made it menacing; certainly fitting for the brutal bout that waged within its confines. This cage match might be the ideal environment to settle the heated rivalry between another disgruntled employee and his corporate overlord — CM Punk vs. John Laurinaitis, anyone?

Who let the dogs … in?
At Unforgiven 1999, the WWE Universe was treated to a — let’s say unique — steel cage experience. In the one-time-only Kennel from Hell Match, Al Snow battled Big Boss Man for the WWE Hardcore Championship. Like mixing peanut butter and chocolate, the Kennel combined two things the WWE Universe loves — a blue-barred steel cage and a Hell in a Cell. Oh, yeah, and did we mention that there were dogs, too? 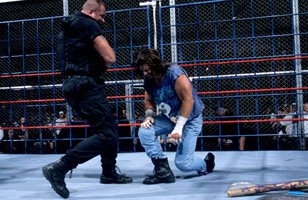 In order to win the match, not only did a Superstar have to escape the inner steel cage and the outer Cell, but in between the two structures sat Rottweilers, just chomping at the bit to get in on the action. Seriously, what’s not to love about this stipulation? While this match type may not be the most practical, just think about how the John Cena/Kane rivalry might have ended if their epic dispute had gone "to the dogs."

Three-tiered mayhem
Then there was WCW’s steel-structured eyesore known as Tower of Doom. Stacking three cages, one on top of the other, competitors would battle their way down to the bottom structure and ultimately, outside to safety. The bout began with two competitors engaged in battle in the top-most cage, and additional grapplers would enter after a set amount of time. Maybe it was the way the cages swayed whenever a competitor entered the fold, but part of the attraction of the pancake of pain was the fact that the steel monstrosity appeared highly unstable and everyone involved in the bout was at high risk throughout its duration. A match type made for high-flyers and hardcore heavies alike, we’d love to see Primo & Epico put their titles on the line in a three-tiered championship bout.

Like the Tower of Doom, we’ve stacked up enough steel cage evidence to make our case, so let’s hope the WWE listens and brings back any — or all — of these cage matches!

Batista’s 5 greatest rivals
Photos: Every Superstar who won championships in NXT and WWE
10 Superstars who dared to mock The Undertaker
A Future WWE: The FCW Story sneak peek: Big E wanted to be a “wrestling mailman”
This week in GIFs: Cena meets “The Fiend” Bray Wyatt and more
Photos: See Ziggler, The Bellas, McIntyre and more during their Florida Championship Wrestling days
toggle menu
Sign in

Shayna Baszler dominates the Chamber to face The Man at WrestleMania