Bring it Back! Announcer uniforms

Something’s missing from WWE’s announce table nowadays. No, we’re not talking about Jim Ross’ “Pier 6 Brawl” declarations – though that’s a good guess – and we’re certainly not referring to “The Cole Mine.“

Rather, WWE.com longs for the days when announcers wore with pride the WWE name on their person. If you feel the way we do, join us in calling on WWE to bring back announcer uniforms. (Photos of classic announcer apparel)

Several incarnations of this formidable fashion statement came and went in the ’80s and ’90s. Announcers such as Gene Okerlund, Sean Mooney and Craig DeGeorge could regularly be seen in navy blue and cream-colored sport coats bearing the classic WWE emblem. It was with Ron Burgundy-esque panache that these microphone masters rocked their trademark look. 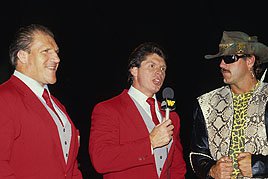 Even Mr. McMahon, then a regular member of the broadcast team, was known to bedizen himself in a scarlet red or sky blue jacket on occasion. Imagine the statement that Matt Striker or Scott Stanford would make by putting on the same chartreuse jacket with the WWE logo displayed prominently?

During this era, an ironic byproduct of the uniform outfits was that they made the on-air personalities who rebelled against them stick out that much more. Such was the case with Jesse Ventura and his diverse wardrobe of leather, feathers and tie-dye, as well as the florid style of one Lord Alfred Hayes. Would those Superstars’ unmistakable fashion sense ever have carried the same weight without a sharp, reserved contrast sitting next to them? How would they have fared juxtaposed against Michael Cole’s often-prismatic ties?

The trend of announcers sporting WWE gear on-camera continued into the early ‘90s. At this time, the classic block logo on Mooney’s jacket during his “Event Center” segments was as much a fixture of WWE programming as Gorilla Monsoon’s inkhorn anatomy terms during matches. 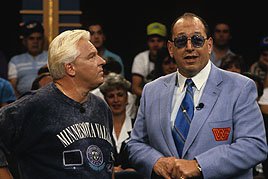 Toward the end of his run as a color commentator in WWE, Bobby “The Brain” Heenan could be seen wearing an offshoot of the standard WWE announcer uniform – a black windbreaker featuring Heenan’s monogram on the chest and “RAW” written in neon letters that ran up and down each sleeve. He even wore it on the Dec. 6, 1993 edition of Raw – the night when Monsoon, sporting an old-school WWE jacket, unceremoniously booted Heenan from WWE.

By the late ’90s, the previously used broadcaster vibe of the embroidered jackets had evolved into something edgier and more befitting of the emerging Attitude Era. Before Mr. McMahon abandoned the announce table, the WWE Chairman routinely wore a black jacket adorned with the Raw logo while calling the action.

Once WWE entered the Attitude Era full swing, Ross was Raw’s main play-by-play announcer. In keeping with the fine history of announcers in WWE garb, Good Ol’ JR – along with the likes of interviewers Cole and Kevin Kelly – appeared on camera with yet another derivative: the “Raw is War” varsity jacket. Constructed out of 100 percent wool and genuine leather sleeves, this jacket not only appeared on television each week, it was even available to the WWE Universe through WWE Shop! 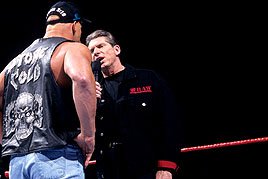 Calling for some variation of the multitude of WWE announcer uniforms to be brought back is not to suggest that the current attire of WWE announcers is inadequate. Jerry “The King” Lawler’s transition years ago from regalia to Ed Hardy T-shirts was seamless, and Josh Mathews’ often open-collar mien is a relaxed look that presents a style all its own.

Yet, isn’t the sight of Cole donning an ‘80s-inspired sports coat with a WWE logo - let alone the potential for Booker T to show up some Friday night wearing a SmackDown!-themed varsity jacket - an idea worth exploring?