Flight delays. Misplaced baggage. Long lines at customs. Jetlag. These are just some of the hardships faced by those who travel overseas. However, for the Superstars and Divas of WWE, the opportunity to entertain WWE Universe members half a world away makes braving such aerial annoyances more than worth it.

On WWE’s latest tour of Europe, which kicked off Nov. 2, ring warriors from Raw and SmackDown have traversed cities in Ireland, France, Spain, Austria, England, Wales, Belgium, Scotland, Switzerland, Poland and Germany. This might seem like a daunting travel itinerary – especially when it’s followed up by a three-hour Raw SuperShow in Boston – but as John Cena relayed to WWE.com, there’s nothing these stalwart competitors would rather be doing. 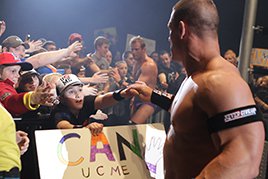 “We’re always well received in Europe, and the tours are like a mini two-week summer camp,” said Cena, who has collected innumerable stamps on his passport since debuting in WWE in 2002. “I find these tours new and challenging no matter how many times I come to these cities. The matches are always fun and I know all of the people in attendance are enjoying themselves, because at the end of the night they are extremely loud.”

The Cenation Commander-in-Chief has been thrilling WWE Universe members around the globe for nearly a decade, but touring worldwide is still a relatively new experience for South African sensation Justin Gabriel, whose WWE journey began in early 2010 during the first season of WWE NXT.

“Traveling is one of my favorite parts of the job,” Gabriel said. “Our fans in the United States get to see us live every week, but in Europe they only get to see us once or twice a year. As soon as my music hits and I’m out there in front of the people, that’s just awesome. Hearing that response stands out no matter what city we’re in.” 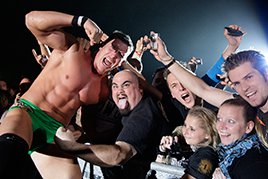 Ted DiBiase, who connects with his loyal fans with pre-show parties outside of arenas, celebrated his 29th birthday during the tour on Nov. 8, and the legions of “DiBiase Posse” members made sure it was a happy one. In fact, prior to a live event in Vienna, Austria, a group of Posse members presented the third-generation Superstar with a birthday cake.

Another multi-generational competitor who thrives during international tours is Tamina, whose father, WWE Hall of Famer “Superfly” Jimmy Snuka, passed on sage advice about performing overseas.

“My father told me that every single night, wherever you are, you have to go to the ring with that same passion, that same love,” explained the dedicated Diva.

As exhilerating as these European tours usually are for both ring warriors and the WWE Universe, that mutual enthusiasm was threatened by a volcanic eruption in Iceland during WWE’s tour of the continent in the spring of 2010. With volcanic ash filling the atmosphere, airplanes were not permitted to take off and many Superstars and Divas trying to return to the U.S. were left stranded. 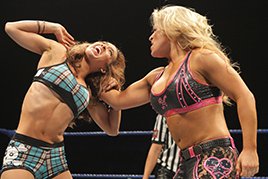 “We had to travel for 24 hours to get to the airport, and we had a 30-minute window to fly out of Madrid, Spain, and we almost didn’t make it,” Natalya noted, comparing this trip to that unfavorable ordeal. “We had about 15 Superstars in a tiny, tiny shuttle bus and could only take two bathroom breaks. It was traumatizing. I couldn’t get my shopping in!”

Volcanoes (and shopping deprivation) aside, it’s safe to say that Superstars, Divas and the entire WWE Universe are eagerly anticipating WWE’s return to Europe next year. To read more about WWE’s latest European tour, click here.