WWE Superstars and Divas Tweet their way through Europe

The WWE European tour means two things for the Superstars and Divas: Meeting droves of the international WWE Universe and no sleep. As the entertainment juggernaut heads overseas, everyone is tweeting their way through Europe. Stick with WWE.com as we bring you all the Superstar and Diva tweets with some international flair.

@milanmiracle: tour is rolling along, im a wee bit sick but I'm holding on, body is quite sore as this is my first tour back since my accident

@RealKingRegal: Can't wait for the lovely reception I'll get in Cardiff tomorrow.Oh how those people love me.So rum the welsh.

@NatbyNature: Leaving Vienna - thank you to The man in the front row who protected me from that scoundrel Fox. Kisses! 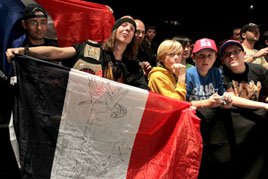 @YoshiTatsuWWE: Thank you very much, Bilbao, Spain and Graz, Austria and Vienna, Austria:)

@thebellatwins: En route to England & Scotland... Have @RealKellyKelly on the flight... We'll try not to mess with her... But we don't make promises! B&N

@NatbyNature:Getting ready for our show in Vienna tonight! What a beautiful city- stayed near the Danube. Day three in Europe is about to be conquered!

@WWE_MasonRyan: Had two great shows in Ireland and France...On to the next one...

@CMPunk: I think I'm in Germany. I know I'm hungry. I wish I was biking.

@Christian4Peeps: Leaving Spain soon.Brought my old high school matador outfit w/ me.Anyone know where I can catch a quick pick up bull fight b4 I take off? 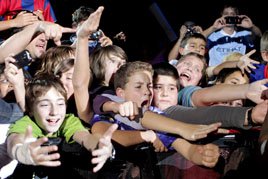 @HEELZiggler: off to nantes, france to steal the show & some freedom fries....all while wearing my "rusty" beret #LMHAO

@TrueKofi: Dublin down (see what I did there?), now to Nantes!

@mikethemiz: The no sleep 2 week European tour has begun. 5am at the gym doing legs. FFDP needs to get me through this  one.#SleepWhenImDead

@EveMarieTorres: Off to Europe! It's gonna be a good one.