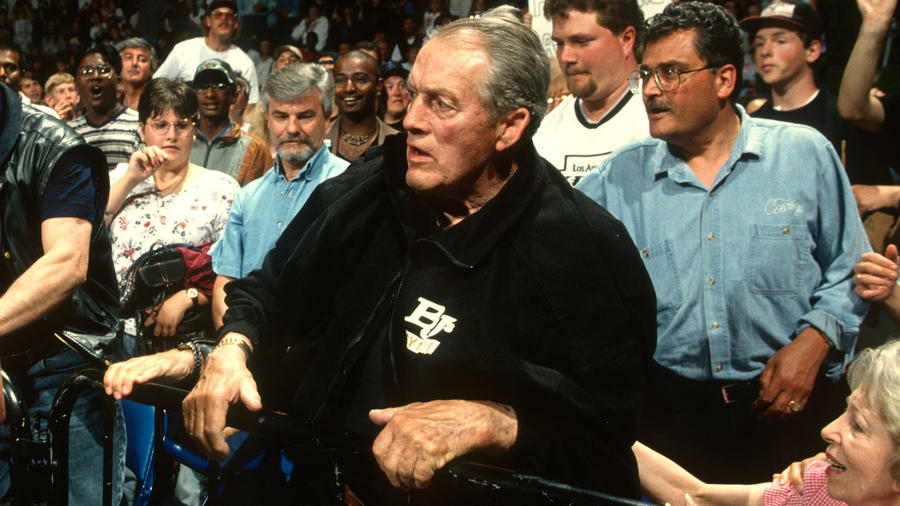 The legacy of one of professional wrestling's greatest families begins with Stu Hart.

Born in Saskatoon, Saskatchewan, Canada, on May 3, 1915, Hart grew up so poor that his family lived in a canvas tent. This destitute lifestyle often led him to the local YMCA where he discovered amateur wrestling. His introduction to the sport was rigorous, as he was brutalized by much older boys on a daily basis — a memory he would carry with him for the rest of his life. But as he grew, so did his talents, and by the 1940s he had played for the Canadian Football League and won multiple amateur wrestling championships. Unfortunately, the cancellation of the Olympics during the Second World War dashed Stu's childhood dream of winning a gold medal.

With the Olympics no longer an option, Stu headed to New York City in hopes of becoming a professional wrestler. Immediately, his impressive build, rugged good looks and extensive amateur background caught the attention of noted promoter Toots Mondt. Mondt, one of the forefathers of WWE, saw potential in the strapping Canadian and took him under his wing. While never a champion, Stu had many high-profile matches with ring legends like Lou Thesz and Frank Sexton and developed a well-deserved reputation as a legitimate tough guy.

It was during this time that Stu met Helen Smith, a shy girl with a thick New York accent who would become his wife for the next 53 years. While Helen did not share Stu's love of wrestling, their children certainly did. The Hart's eight sons — Bret, Owen, Ross, Dean, Wayne, Keith, Bruce and Smith — all worked in the wrestling industry. Their daughters — Diana, Alison, Georgia and Ellie — all married wrestlers.

The Harts raised their kids in Calgary, Alberta, Canada. It was here that Stu established Stampede Wrestling, a regional promotion which ran shows throughout western Canada for nearly 40 years. Home to local stars like Gama Singh and The Stomper as well as international standouts like Jake "The Snake" Roberts and Abdullah the Butcher, Stampede was very much a family business. Stu and his boys were the stars, Wayne reffed the matches, Helen handled the bookkeeping.

Due to the up-and-down nature of the wrestling business, there were many lean years for the family, but business could be very good. During a boom period in 1951, Stu purchased an expansive mansion in Calgary that would become known as The Hart House. A massive, redbrick manor that was once an orphanage, the house was a bustling center of activity. Children ran through the hallways, visiting wrestlers slept in guest rooms and a bear named Ted lived under the back porch. But it was in the basement where the true madness happened.

Known as "The Dungeon," Stu Hart's makeshift gym has become the stuff of wrestling lore. Little more than some old, thin mats surrounded by cracked wood paneling and rusted barbells, "The Dungeon" was the rigorous training ground of future ring legends like "Superstar" Billy Graham, Brian Pillman and The British Bulldogs. A strict mentor, the barrel-chested Stu delighted in twisting his students to their physical limits — a skill he had learned decades earlier in the dingy gyms of Saskatoon.

This act, known as "stretching," could bring even the toughest man to tears. Stu's children have often spoken about watching bodybuilders or professional football players walk down the narrow stairwell to "The Dungeon" and then hearing their screams of pain rising through the floorboards minutes later.

Stu also subjected his sons to this harsh style of training. While this strict schooling was difficult for the boys when they were younger, it paid off in the long run. Due in part to their father's guidance, Bret "Hit Man" Hart and Owen Hart would achieve international stardom, becoming two of the most beloved competitors in WWE history. Stu was on hand for many of their greatest accomplishments, including Bret's Intercontinental Championship win at SummerSlam '91 in Madison Square Garden and Survivor Series 1993 where Bret, Owen, Keith and Bruce teamed successfully.

While Hart wrestled only sporadically after the '70s, he continued to train young grapplers well into his 80s. Even with arthritis and diabetes crippling his once mighty body, Stu could still bring the biggest man to his breaking point. When his health worsened, his sons took over the majority of the family operations, giving younger competitors like Chris Jericho, Lance Storm and The Hart Dynasty the ability to experience the Hart-style of training.

Stewart Edward Hart passed away on Oct. 16, 2003 at the age of 88. While his death was attributed to a stroke, the tough, old Canadian was said to be the victim of a broken heart, having never truly gotten over the loss of his beloved wife two years earlier. His funeral was attended by hundreds of friends, family and admirers, including many of the countless competitors he inspired like Chris Jericho, Jim "The Anvil" Neidhart and Bad News Brown.

Stu Hart's respect extended beyond the ring, as well. The Hart House, a part of wrestling history as significant as Madison Square Garden, has become a historic landmark in Canada. And in 2000, Stu was awarded the Order of Canada — the country's highest honor.

His posthumous induction into the class of 2010 is yet another testament to not only an amazing career, but an extraordinary life.