Captain Charisma on top of the world

Some things just take time. Such is the case with Christian's quest to win the World Heavyweight Championship. His dream finally became reality at Extreme Rules 2011 when he defeated Alberto Del Rio in a Ladder Match. (Full story | Photos | Career photos)

Less than 24 hours after capturing his first World Title, WWE.com caught up with Captain Charisma to get his thoughts on his big win.

The victory
“I can’t describe how it feels. It’s still surreal. It was like living in a dream when I unhooked the title,” he said.

Living in Tampa, Christian was able to go straight to his own home to savor the victory with family and friends.

“Usually, you go back to a hotel and open up your bag and throw something on a chair. Last night, I got to go home and put my bag down in my house and take the title out and set it down on the desk. It was one of those nights where you couldn’t sleep because you were so high strung. We sat up and talked and had some laughs. It was a great night.”

Still bearing the marks of his brutal Ladder Match, Christian recounted the cuts, bruises and scrapes he received to his face and torso.

“I woke and rolled out of bed this morning and I was in so much pain. My knees are sore. My back is killing me. My head is throbbing, and I have a huge lump on the side of my head that hurts when I chew. But you know what? I’d do it all again. I’m not going to complain one bit about any of it. It was all worth while.” 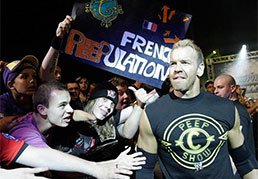 For the peeps
More than just an accomplishment for himself, Christian’s victory was for his family, best friend Edge, and all of his peeps who have supported him over the years.

“That always kept me going and made me strive harder to not let them down and make sure that one day I would become World Heavyweight Champion,” he said. 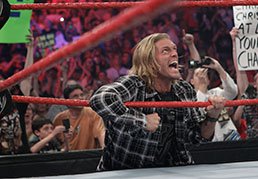 After looking down from the ladder at Extreme Rules and seeing Edge with tears in his eyes, Christian knew “it meant just as much to him to see me do that as it did to myself.”

Coming into WWE at the same time, both Superstars enjoyed an illustrious tag team career together. But, there was a time when the two squared off against each other in the ring, including when Christian won his first Intercontinental Championship against Edge.

“It’s almost like you’re fighting your brother. You didn’t want to, but you kind of had to. You had to fight to get the respect of each other. It’s like two brothers going out in the back yard to duke it out and your father picks you up and dusts you off and says ‘now shake hands.’"

After years of success in WWE, Christian has finally elevated himself to the next level – a level his friend Edge was accustomed to being. (Edge career retrospective.)

And in perhaps the most fitting fashion, Christian won his first World Title in a Ladder Match – something he and Edge excelled at for many years.

As Christian begins his first World Title reign, take a look back at some key moments in his career.

VIDEOS
Christian questions his resolve
Christian talks about his start in WWE, teaming with Edge, and realizing his ultimate goal

More than five hours of matches at WWEClassics.com