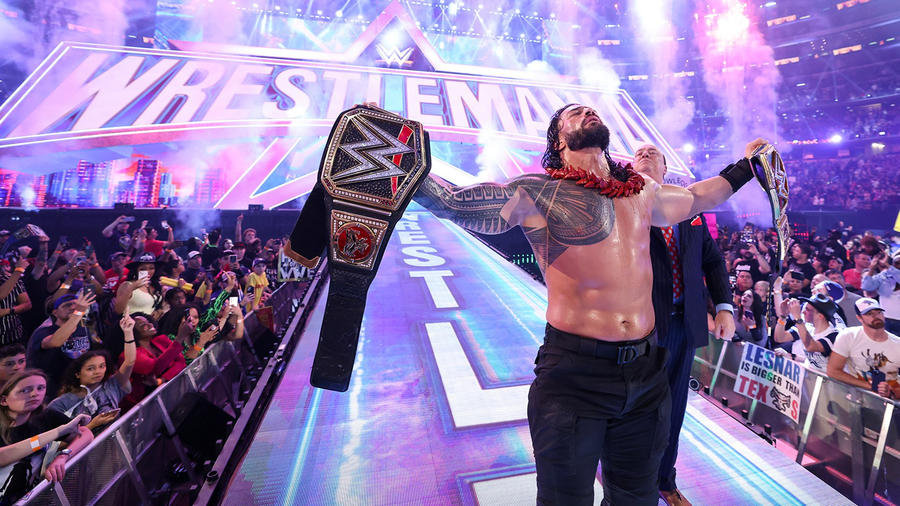 For some, one versus all sounds like an unwinnable contest, a hellish punishment or a never-ending nightmare. For Roman Reigns, it was just another day at the office. Or in the case of The Big Dog, another day at the "Head of the Table."

The agile, imposing juggernaut has been told his entire life that he cannot accomplish his goals. And since day one of his arrival in WWE, he has proven his naysayers wrong in the language of broken bodies and shattered Superstars who thought they had his number. Whether it was finishing opposing teams off as the enforcer of The Shield or steadily grinding his way toward the WWE Championship as a solo competitor, Reigns has made a lasting impression on anyone who’s come into contact with him.

On his own, The Big Dog has never turned away from a challenge and has proved himself time and time again, battling everyone from Brock Lesnar to John Cena to a WrestleMania showdown with The Undertaker that brought the legendary Deadman his second loss at The Showcase of the Immortals.

At SummerSlam 2018, Reigns finally vanquished his greatest rival when he defeated Brock Lesnar to win the Universal Title. He then set out to be what he had always been, a fighting champion. That all changed on the Oct. 22 edition of Monday Night Raw, when Reigns announced that the leukemia that he had lived with for 11 years had returned. Because of this, he relinquished the Universal Title and returned home to fight it. Thankfully, Reigns' battle was a successful one, and he returned to Raw with renewed focus, The Big Dog battled Drew McIntyre at WrestleMania 35 and defeated The Scottish Psychopath, proving that he was as powerful as ever.

However, after missed several months in 2020, The Big Dog made a startling return after "The Fiend" Bray Wyatt defeated Braun Strowman for the Universal Championship at SummerSlam, ruthlessly attacking both men in a moment that no one saw coming.  From there, Reigns enlisted the assistance of Paul Heyman as his special counsel, recaptured the Universal Title, subjected his cousin Jey Uso and became firmly entrenched as the face of Friday Night SmackDown. His status as SmackDown's franchise player was solidified when he selected first overall in the 2021 WWE Draft.

With his family by his side, Reigns formed The Bloodline, consisting of himself, his cousins The Usos and Solo Sikoa and his Special Counsel Paul Heyman. Since The Bloodline have formed, they have run roughshod all over WWE, with Reigns becoming the longest reigning Universal Champion and also capturing the WWE Championship in "The Biggest WrestleMania Match in history" by defeating WWE Champion Brock Lesnar at WrestleMania 38. With Sami Zayn joining The Bloodline as an "Honorary Uce", The Bloodline is stronger than ever.

Roman Reigns calls himself “The Head of the Table” who provides for all and puts food on the table, and he refuses to accept anything less than complete respect from any Superstars that come in his “Island of Relevancy.” And he has shown time and time again that those who show him or his family disrespect will pay a very painful price.