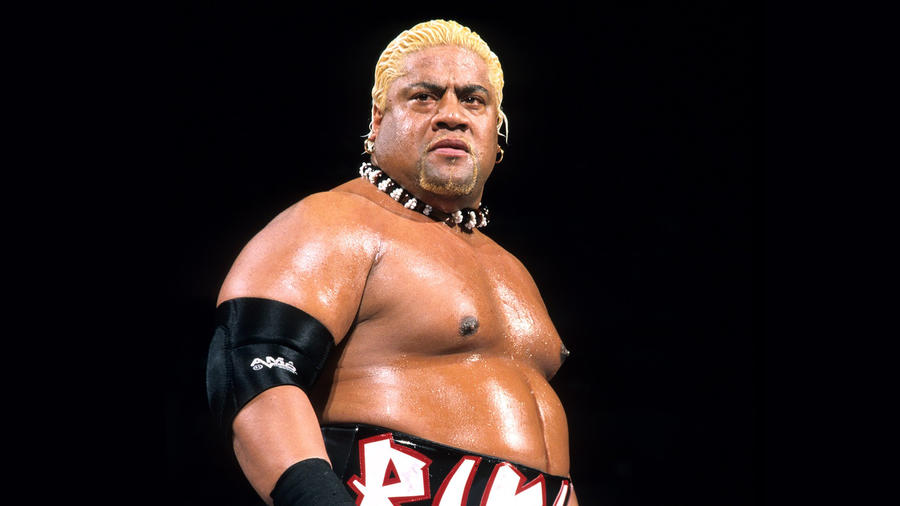 WWE has been home to many giants, but few big men have been as agile as the 400 plus-pound Samoan wonder known as Rikishi.

A member of the famed Anoa'i wrestling family, Rikishi made his WWE debut in the early 90s under the name Fatu. The Superstar immediately teamed up with his cousin, Samu, to form the Headshrinkers, a savage duo cut from the same cloth as their uncles, The Wild Samoans. The mad pair captured the World Tag Team Championship on April 26, 1994, defeating The Quebecers on Monday Night Raw. After losing the gold to Shawn Michaels & Diesel, The Headshrinkers split. Rikishi would then try his luck with a new partner, Sionne, but the pair had limited success. The Samoan then briefly competed in singles action before leaving WWE in 1997.

In 1999, Rikishi returned with a new name and a new look that consisted of bleached blonde hair, hip sunglasses and sumo wrestling gear. The big man formed a wildly popular alliance with the duo known as Too Cool, Grand Master Sexay and Scotty 2 Hotty. This trio was loved for their hip hop dance moves and for Rikishi's infamous signature maneuver — the Stink Face. When his opponent was incapacitated in the corner of the ring, Rikishi would stand over the Superstar and plant his ample buttocks on their face. This humiliating move was applied to many WWE greats, including Mr. McMahon and The Rock. As a fan favorite, Rikishi had a memorable reign as Intercontinental Champion and waged great rivalries with Edge & Christian and Val Venis.

In spite of this memorable run as a fun-loving big man, Rikishi may be best remembered as the driver of the car that hit "Stone Cold" Steve Austin at the 1999 Survivor Series. Claiming he had performed this heinous act to allow his cousin, The Rock, to capture the WWE Championship, Rikishi began to battle Austin, culminating in a brutal No Holds Barred Match at No Mercy in 2000. Later, it was revealed that Triple H was the mastermind behind the hit and run, giving the WWE Universe more reason to detest the once-popular Samoan.

Eventually, the bulky Superstar saw the error of his ways and went back to being a man the fans could cheer for. Realigning himself with Scotty 2 Hotty, Rikishi would go on to capture the WWE Tag Team Championship in 2004. After holding the gold for a few months, Rikishi exited WWE, leaving behind a memorable legacy of hilarious dance moves, unexpected acts and many, many stinky faces.

Rikishi was inducted into the WWE Hall of Famer the night before WrestleMania 31 in San Jose, Calif., not far from his hometown of San Francisco.