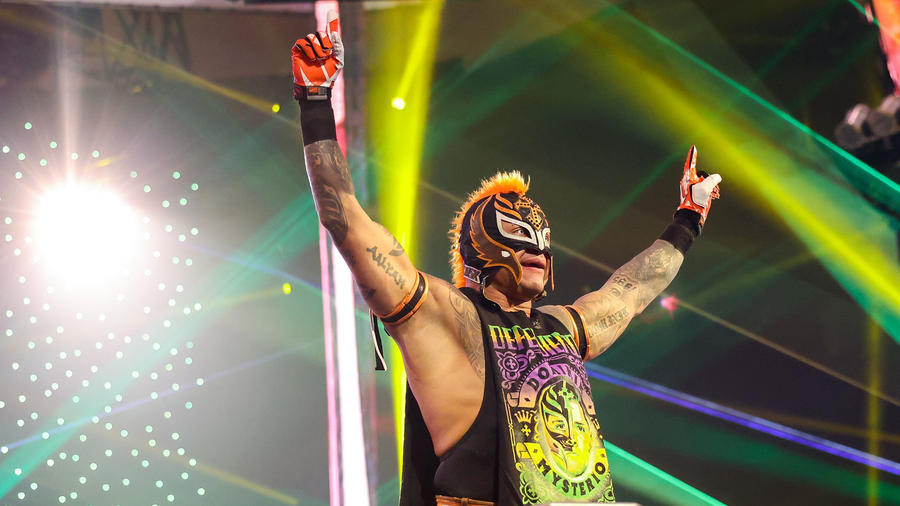 He stands only 5-foot-6 and barely weighs 175 pounds, but a lack of size didn’t stop the incomparable Rey Mysterio from achieving giant dreams like capturing the WWE Championship or outlasting 29 other Superstars to win the Royal Rumble as the No. 2 entrant. Whether he was standing up to a dangerous giant like Kane or flying down from the top of a steel cage, The Ultimate Underdog is known for refusing to be intimidated inside ring.

Trained in the proud Mexican tradition of lucha libre before he was even old enough to drive, Rey Mysterio adopted his ring name in tribute to his uncle and hid his face under a mask as lucha custom dictates. In a world of hooded high-flyers, the exhilarating Mysterio stood out enough to earn the attention of ECW and WCW where his thrilling bouts with such rivals as Eddie Guerrero and Psicosis became the stuff of legend among sports-entertainment fans. His greatest successes, however, were realized after joining WWE in 2002.

First establishing himself in the cruiserweight and tag team divisions, the Mexican Superstar soon proved that size doesn’t matter when he beat the odds to win the Royal Rumble Match in 2006. From there, Mysterio accomplished the inconceivable when he won the World Heavyweight Championship at WrestleMania 22, becoming the smallest Superstar ever to hold that title.

Mysterio’s accomplishments did not end there. At Fatal 4-Way 2010, the high-flyer captured his second World Heavyweight Championship against Big Show, CM Punk and Jack Swagger. In July 2011 on Raw, Mysterio scored his first WWE Championship with an emotional win over The Miz. The reign was short-lived, however, as he lost the coveted title that same night when he went one-on-one with fellow fan favorite John Cena.

After taking a sabbatical from WWE, Mysterio made his jaw-dropping return as a surprise entrant in the 2018 Royal Rumble! Mysterio hasn't missed a beat since returning, as his edge-of-your seat matches against Andrade are already the stuff of legend. Now on Raw after the 2019 Superstar Shake-up, Mysterio has enjoyed a United States Title reign and had several thrilling matches against Andrade, Samoa Joe and even Brock Lesnar.

Rey achieved a dream when he competed in a tag team match with his son Dominik as his partner, and after the Mysterio family engaged in a highly personal rivalry with Seth Rollins & Murphy, Rey and Dominik were each drafted to SmackDown during the 2020 WWE Draft and soon made WWE history as the first father and son tandem to win the SmackDown Tag Team Titles. More challenges await now that they're both on red brand as a result of the 2021 WWE Draft.

At WWE Clash of the Castle, Mysterio's deepest fears were realized when his own son turned on him and joined the vitriolic Judgment Day. Dominik would then goad his father into hitting him but Rey could not hit his own son. The Master of the 619 would appeal to Triple H for a trade and in October of 2022 Rey Mysterio was officially traded to Friday Night SmackDown in exchange for Baron Corbin.

With his revolutionary style, Mysterio overcame the odds to enjoy a championship career that is respected by fellow Superstars and the WWE Universe alike, making him one of the most well-known and beloved competitors of all time.