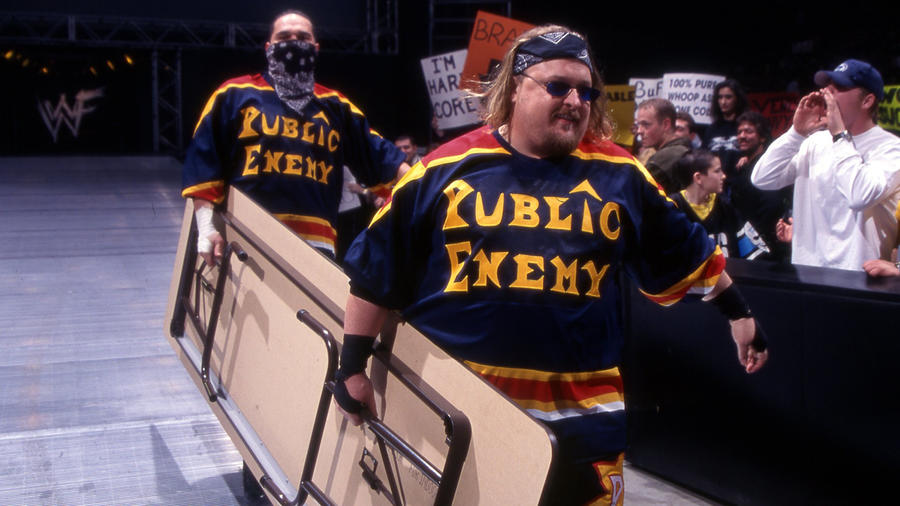 Before Bubba Ray ever told D-Von to get the tables, a pair of jersey-clad street toughs defined the early days of ECW with somersaults and splinters.

Beginning his career as The Cheetah Kid 15 years before joining ECW, the veteran met Paul Heyman during the early 1990s. Heyman noticed Cheetah’s tremendous chemistry against a grappler named Johnny Rotten, and decided that if the two were such great opponents, they must make a great tag team. The Public Enemy was born.

Rotten changed his last name to Grunge and The Cheetah Kid was reborn as “Flyboy” Rocco Rock. Together, the tandem opened UltraClash on Sept. 18, 1993 — Heyman’s first show in charge of ECW — and The Public Enemy became an instant Philadelphia sensation. The two hoodies might have looked a little strange with their uncoordinated dancing and awkward rapping, but once they got in the ring, Grunge and Rocco Rock were just two South Philly thugs looking for a fight.

Over the course of their genre-defining ECW tenure, The Public Enemy faced off with Terry and Dory Funk, Jr. in a horrific Barbed Wire Match at 1994 and engaged in a groundbreaking, tension-fueled rivalry with New Jack & Mustafa — The Gangstas. With their fun-loving demeanor and reckless disregard in the ring, “Flyboy” and Grunge’s popularity began to skyrocket, leading them to four reigns as ECW Tag Team Champions by defeating competitors including Tazz, Cactus Jack, Mikey Whipwreck and Dean Malenko.

They were so popular that after one victory over The Gangstas, the tandem was joined in the ring by nearly the entire crowd of ECW faithful in attendance. A post-match dance party on the canvas made the ring collapse in an iconic ECW moment. One year prior, The Public Enemy were involved in another incident of mob mentality when fans tossed dozens of steel chairs in the ring.

Upon arriving in WCW, “Flyboy” and Grunge brought their tables and high-risk somersaults to matches against revered duos including The Nasty Boys and Harlem Heat, and defeated the latter for the WCW Tag Team Championships. Following a brief return to their home in ECW, The Public Enemy found themselves in WWE where they gained a victory over The Hardy Boyz and fought the APA in a wild brawl.

Despite never quite finding their footing on sports-entertainment’s grandest stage, The Public Enemy are remembered for being the first true ECW stars and revolutionizing a brand of hardcore tag team brawling that carries through today.