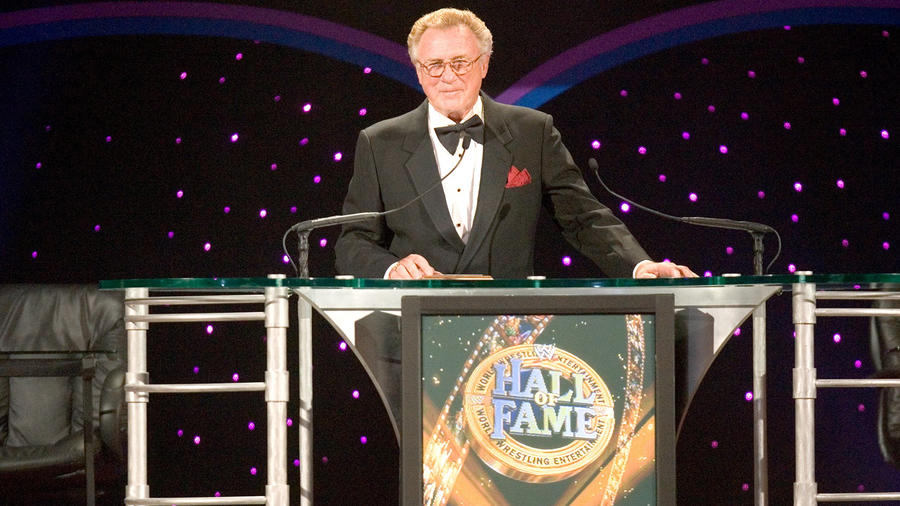 There are times when a sports-entertainer is just destined to become great. Some are born into it and some are brought into it, but they all leave a mark that nobody will ever forget. Their successes aren't measured just by the championships they won, but also by the legacy they create in the ring for future stars of the business to follow.

Nick Bockwinkel is such a man. He broke into sports-entertainment in the mid-1950s after playing football at the University of Oklahoma. Early in his sports-entertainment career, he was under the tutelage of his famous father, Warren, and wrestling legend Lou Thesz. Nick teamed with his father numerous times in the ring, competing in Georgia, Texas and the Pacific Northwest before moving on to the place he would find the most success: the American Wrestling Association.

It was in the AWA that he formed a devastating tag team with Ray "The Crippler" Stevens. Managed by WWE Hall of Famer Bobby Heenan, Bockwinkel and Stevens would capture their first AWA World Tag Team Championship in 1972 and would go on to hold the titles three times.

After his success as a tag team wrestler, Bockwinkel broke out into singles competition, ready to take AWA by storm. After working his way up the rankings, Bockwinkel shocked the world in 1975 when he defeated another WWE Hall of Famer, Verne Gagne, to become AWA World Champion. The win ended Gagne's seven-year reign as AWA champion.

Bockwinkel infuriated AWA fans for close to five years as the champion. He became one of, if not the most hated wrestler of all-time. Bockwinkel often remarked, "I am the smartest wrestler alive." However, his arrogance could not detract from the talent he displayed in the ring, as he took on all challengers.

Bockwinkel would have rivalries with some of the most talented wrestlers of all-time as the champion of AWA. From AWA Legends like Gagne, Mad Dog Vachon and Dick The Bruiser to world-renowned Superstars such as Terry Funk, Larry Zbyszko and Bruiser Brody to fellow Hall of Famers Jerry Lawler, Andre The Giant and Hulk Hogan, Bockwinkel was not afraid to put the gold on the line against anyone. He would hold the AWA World Heavyweight Championship a total of four times, his last reign being ended by fellow 2007 WWE Hall of Fame inductee Curt Hennig in May 1987.

During his time as champion, Bockwinkel also made history as a participant in two of the greatest matches in wrestling history. On March 25, 1979, he challenged then-WWE Champion Bob Backlund in the first-ever "unification" match between an AWA and WWE Champion. The historic match went to a double-countout, and is still regarded as one of the best of all-time. In 1986, Bockwinkel would again make history as he faced then-NWA World Heavyweight Champion Ric Flair in the final AWA match in the Winnipeg Arena.

The late Bockwinkel also enjoyed stardom outside the ring, making appearances on The Monkees, Hawaii Five-O and even Hollywood Squares, where he won $1,300 and a new kitchen. Bockwinkel would also step out of the ring and serve as the Commissioner of WCW in 1994.

It was only fitting that when Bockwinkel was inducted into the WWE Hall of Fame in 2007, it was longtime manager Bobby Heenan who sent him into the Hall. And of course, Heenan was in rare form, telling the audience that "Bockwinkel was a great guy and never did anything wrong...so he couldn't have played in the NBA or the NFL right?"

Nick Bockwinkel took the traditions of pioneers in wrestling, such as his father Warren and Lou Thesz, and transformed them to his liking during his career. It was those ideals that made Bockwinkel a true visionary and laid the foundations for the Superstars of today. Bockwinkel will be remembered as a great wrestler, a fighting champion and a WWE Hall of Famer.