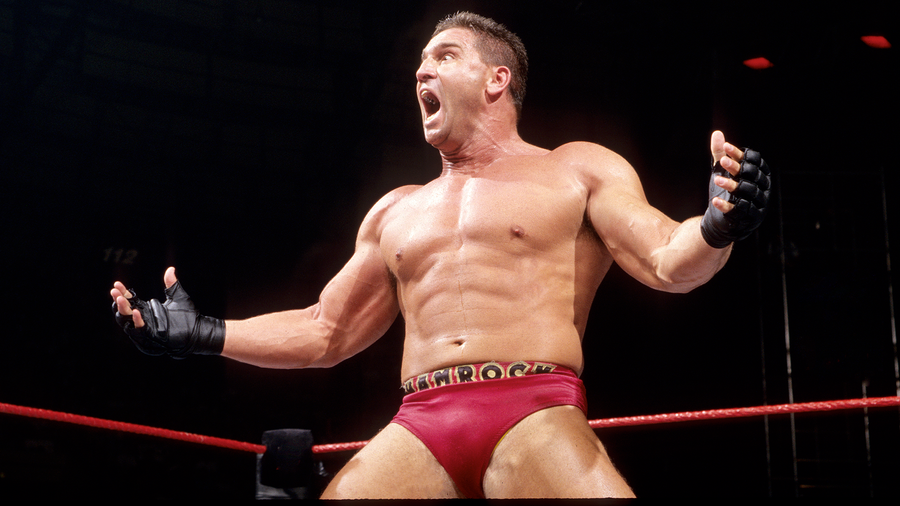 In the late 1990s, an unmistakable and thundering guitar riff marked the coming of The World’s Most Dangerous Man, Ken Shamrock. The memorable entrance theme signaled an unbridled intensity that Shamrock brought to the squared circle — a competitive nature forged through his mixed martial arts discipline and WWE career.

The leader of the Lion’s Den training camp for fighters made a name for himself in the early days of UFC. Shamrock’s rivalry with MMA legend Royce Gracie established him as one of the organizations first and biggest stars. In 1995, Shamrock became the UFC’s first champion outside of tournament competition, winning the Superfight Championship before competitors were divided by weight class. Establishing a hall of fame career in UFC, The World’s Most Dangerous Man decided to move on to a then-grander stage in 1997 by joining WWE.

Making his first appearance at ringside in February 1997, Shamrock soon became involved in the heated rivalry between Bret “Hit Man” Hart and “Stone Cold” Steve Austin. At WrestleMania 13, The Excellence of Execution and The Texas Rattlesnake engaged in a No Disqualification Submission Match with Shamrock as the special referee in a bout that gave the WWE Universe their first glimpse of The World's Most Dangerous Man's physical nature.

Shamrock soon entered active competition and quickly became one of the most feared Superstars on the WWE roster. Shamrock’s intensity often triggered his uncontrollable temper, leaving his opponents defenseless even after the closing bell rang.

Shamrock’s temper may have gotten the better of him at times, but his intensity is also what led him to his greatest achievements. In 1998, he proved his dominance by winning the King of the Ring tournament. That same year, Shamrock won an eight-man tournament to capture the Intercontinental Title. While reigning as Intercontinental Champion, the MMA specialist teamed with The Big Boss Man to win the World Tag Team Championship, becoming a dual champion.

Shamrock’s presence opened up new realms of combat in WWE. The grappler became known for his participation in unorthodox matches, including a Hart Family Dungeon Match in the basement of the legendary Hart house and an MMA-inspired Lion’s Den Match. In addition, he competed in a KO Match, Lion’s Den Weapons Match, Iron Circle Match and a series of Submission Matches.

Shamrock ended his WWE career after suffering an injury during a hostile rivalry with Chris Jericho. Though Shamrock eventually returned to Mixed Martial Arts, the former Intercontinental Champion’s raw intensity and abilities made him one of the most feared and dangerous competitors of the Attitude Era.

As of this writing, Ken Shamrock is 52 years old and preparing for an MMA fight against fellow UFC Hall of Famer and former WWE Superstar, Dan "The Beast" Severn.