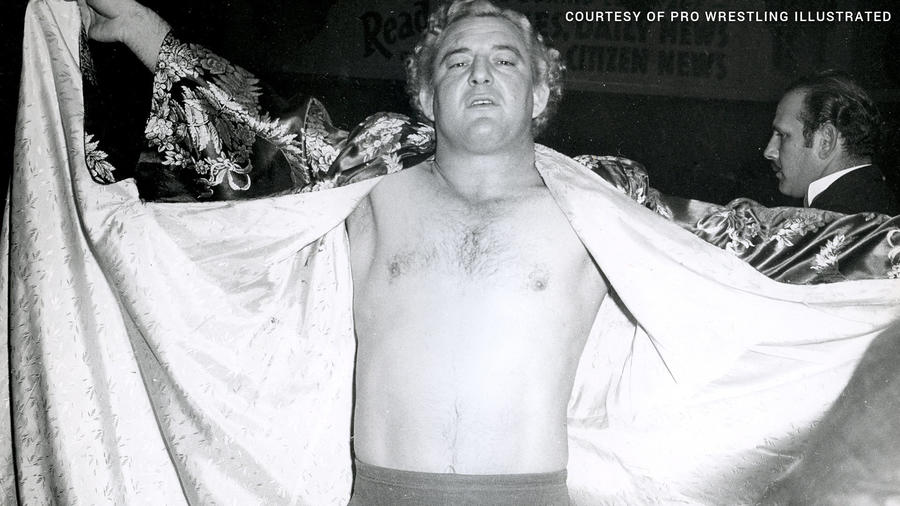 Born in 1915, George Wagner grew up poor in Nebraska during the Great Depression and turned to professional wrestling as a way to earn a living. Early in his career, Wagner was a normal, clean-cut grappler like most of the competitors of the era. Due to his small stature and limited abilities in the ring, he experienced little success. Then he got an idea.

Seeing an opportunity to bring more entertainment to the world of professional wrestling, George Wagner became Gorgeous George, a snooty, platinum blonde villain who draped himself in lace and fur and entered the ring to the strains of "Pomp and Circumstance." Accompanied by a manservant who sprayed the ring down with Chanel perfume, George would enrage the audience just by walking into an arena. When the official would attempt to check George for foreign objects, he would recoil and shout, "Get your filthy hands off of me!"

While this behavior may seem tame by today's standards, it was unheard of in the 1940s. Needless to say, audiences ate it up and bought tickets just to hate him. At the same time, televisions were becoming a fixture of American households during the post-World War II economic boom and professional wrestling was what everyone was watching. With his over-the-top antics and self-proclaimed nicknames like "The Beautiful Bicep" and "The Sensation of the Nation," Gorgeous George quickly became the biggest attraction on this new medium. By the end of the decade, the man who grew up poor was now the highest-paid athlete in the world.

George would remain a major star throughout the 1950s, often competing in highly-publicized matches where his precious golden locks were on the line. In 1963, George passed away at the age of 48, but his amazing influence would live on through legends like Buddy Rogers, "Superstar" Billy Graham, Ric Flair and countless others. Any Superstar who has used an entrance theme, donned a robe or given themselves a nickname owes a debt of gratitude to George Wagner.

20th century luminaries like Muhammad Ali, Bob Dylan and James Brown have also noted George as a major influence on their personas. "Gorgeous George: The Outrageous Bad-Boy Wrestler Who Created American Pop Culture," a 2008 biography on the legend by John Capouya, went as far as to claim that George created pop culture as we know it today.

It is this unrivaled impact that earned Gorgeous George a place in WWE's Hall of Fame.