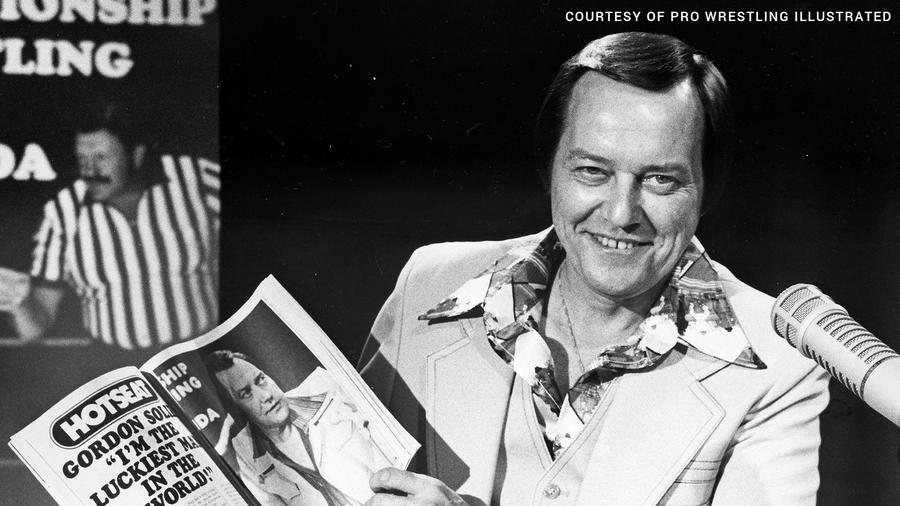 An iconic announcer's voice can help make the tiniest details seem important and the greatest moments seem larger than life. Names like Walter Cronkite and Howard Cosell are world-renowned in the fields of news and sports, and their unmistakable voices could sooth a dire situation yet also magnify a great one.

In sports-entertainment, there are many great commentators, but few whose voices are synonymous with excellence. Of those, there is only one "Dean," one man who has been called both the "Walter Cronkite" and "Howard Cosell" of the industry; that man is the legendary Gordon Solie.

Hailing originally from Minnesota -- home to hundreds of sports-entertainment legends -- Solie moved to Tampa, Fla. in the 1950s after completing military service in the United States Air Force. Little did he -- or anyone, for that matter -- know that while starting out as a radio disc jockey and promotions man, Solie would eventually become one of the most famous voices of all-time.

Solie began his sports-entertainment career as a ring announcer, making $5 a night emceeing weekly shows in the Tampa Bay area. He soon began working for Championship Wrestling from Florida, and in 1960, he moved into the broadcast booth to become the lead announcer for CWF's Saturday morning television shows, a spot he would occupy for the next quarter-century. During that time, he commentated on matches featuring some of sports-entertainment's biggest legends, including WWE Hall of Famer Dusty Rhodes, the Brisco Brothers and Dory Funk, Jr., among numerous others.

Solie rose to national prominence when Superstation WTBS began broadcasting sports-entertainment, and the exposure helped him branch out, leading to Solie working for promotions in Georgia, Alabama and Puerto Rico. What our fans in those areas found out was something Floridians had known for years: That Solie was a true icon.

Much of his fame stems from his gravelly-yet soothing voice he used to call the in-ring action and his unique lingo. He is credited for originating the term "Pier-Six Brawl" to describe a wild brawl and was also notorious for noting when a bloodied Superstar was "wearing the crimson mask." His vast knowledge of the impact of each maneuver shone in his words, including his oft-imitated signature call of a suplex as a "su-play."

Solie often said that his approach to calling matches was low-key -- yet he could convey the increased importance of a moment simply by slightly modifying his tone of voice. His signature sign-off -- "So long from the Sunshine State," followed by a wink -- became an institution among Florida wrestling fans of multiple generations.

When CWF finally folded in 1987, Solie returned to Georgia and became one of the lead announcers for the NWA (later WCW) television programs. It was a natural transition for "The Dean," who had also been Georgia Championship Wrestling's lead announcer before it became a subsidiary of NWA/WCW. He remained there until his eventual retirement in 1995.

Sadly, Solie was diagnosed with cancer soon after his retirement. In the late-1990s, his vocal chords were removed due to throat cancer, robbing the world of one of the greatest voices to fill the airwaves. In July 2000, Solie finally succumbed to cancer at the age of 71, leaving behind five children and a multitude of fans.

In 2005, his posthumously-released memoir Gordon Solie ... Something Left Behind became a best-seller, proving that his legacy and his memory will never be forgotten by the generations of sports-entertainment fans fortunate enough to have grown up -- or grown old -- with the sound of his voice. In 2008, "The Dean" took his rightful place in the pantheon of the elite as Jim Ross inducted him into the WWE Hall of Fame, an honor accepted by Solie's five children - Pam, Danise, Jonard, Eric and Greg.