Taped thumb to the throat 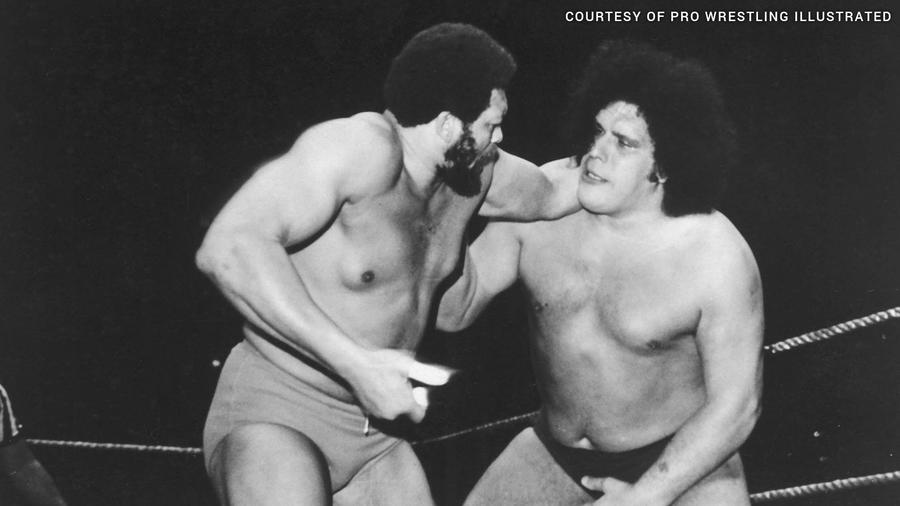 Very few athletes reach the pinnacle of one sport, let alone two, but Louisiana's own Ernie Ladd is one of those special few to master multiple arenas. A dominating football player before transitioning into sports-entertainment, Ladd used his size, strength and natural talent to become a force both on the gridiron and in the squared circle.

A star defensive lineman for Louisiana's Grambling State University in the late 1950s, the 6-foot-9, 300-plus pound Ladd was selected by the San Diego Chargers in the 1961 AFL Draft. Over seven AFL seasons with the Chargers, Houston Oilers and Kansas City Chiefs, Ladd became a four-time AFL All-Star and appeared in three AFL Championship Games, winning titles in 1963 (Chargers) and 1967 (Chiefs). Although he was one of the largest players of his era, Ladd had amazing quickness for a man his size, earning the nickname "Big Cat" as a result.

As dominant as he was on the gridiron, Ladd found his second calling while still playing for the Chargers. As a publicity stunt, some San Diego-area wrestlers challenged the Big Cat to a private workout session in the ring, and that's where he found his second passion.

Ladd soon began competing part time in the Los Angeles promotion during the football offseason. Due to his notoriety as a pro football player, Ladd quickly became one of sports-entertainment's hottest draws and was eagerly sought out by promoters across the nation. As if his mainstream name wasn't enough, Ladd also caught mat fans' attention by becoming one of the sport's most despised villains, often stirring up crowds with his cocky and colorful interviews and through the use of his infamous taped thumb.

The Big Cat first made his way to WWE in 1968, and the company would become his home base for the next decade. Managed by the Grand Wizard, he was a persistent challenger to WWE Champions Bruno Sammartino, Pedro Morales and Bob Backlund, although he never won the title. His rivalries with fellow behemoths Andre the Giant, Haystacks Calhoun and especially Gorilla Monsoon are also legendary in their own right. After leaving WWE in 1980, Ladd spent the final few years of his career in the Mid-South region, where he once managed fellow Hall of Famers Afa & Sika, The Wild Samoans. When he finally retired in 1986, Ladd had amassed numerous championships all over the United States and Puerto Rico to go with his two AFL Championships.

Long a supporter of the Republican Party, Ladd transitioned into politics following his retirement. A friend of the Bush family since the 1960s, Ladd campaigned for both Presidents George H.W. Bush and George W. Bush, with the junior Bush making Ladd a special deputy to his Presidential Inaugural Committee. In addition to his political activity, Ladd was part of a Christian ministry that provided services to prison inmates, and even owned his own restaurant -- Big Cat Ernie Ladd's Throwdown BBQ -- in New Orleans until Hurricane Katrina devastated the "Big Easy" in 2005.

Having already been inducted into the San Diego Chargers Hall of Fame in 1981, Ladd added one more accolade to his resume when he was called to the WWE Hall of Fame in 1995. Ladd was inducted by long-time colleague Bobo Brazil, whom the Big Cat had himself inducted one year earlier.

Unfortunately, Ladd was diagnosed with cancer in 2004. On March 10, 2007, the Big Cat lost his three-year battle with the disease, passing away in his native Louisiana at the age of 68. Though gone, he will never be forgotten, as Ernie Ladd made a name for himself in every field he chose to endeavor into.