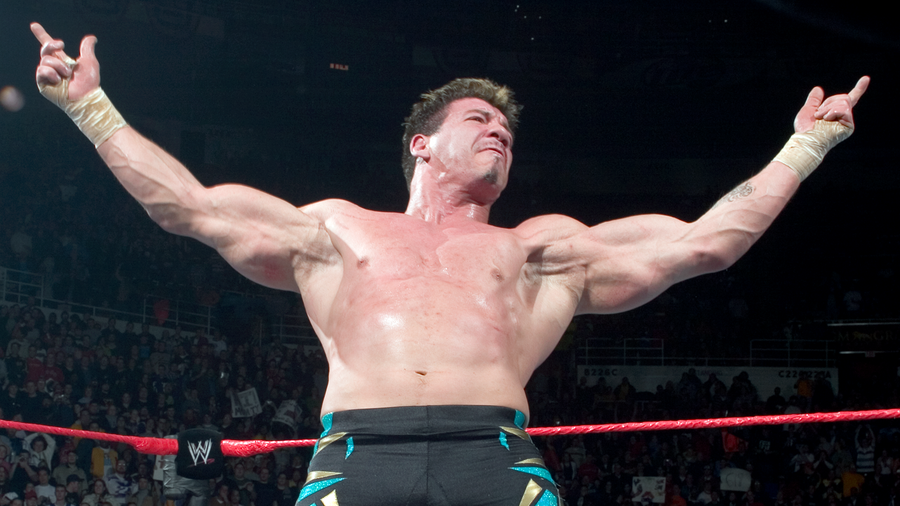 When Eddie Guerrero flashed that trademark grin, you knew he was already plotting his next move. The big question is what tricks he had in store for his opponent next. Lying, cheating, stealing – it was all fair play in the ring for the unpredictable WWE Hall of Famer.

Beyond his mind games though, Eddie was a performer of remarkable versatility. He could make you hate him, then love him, then wonder where the heck you stand – and that's all in one night. Regardless of whether the context was serious or lighthearted, Guerrero commanded attention from every spectator.

Eddie discovered his unbridled passion for sports-entertainment as a child through his father, longtime wrestling promoter Gory Guerrero. As Gory plied his trade in El Paso, Texas, Eddie was busy scrapping with his nephew, Chavo Guerrero Jr., during the show intermissions. Eddie would later move on to wrestle collegiately at New Mexico Highlands University before returning to El Paso to learn how to become a future WWE Superstar.

After making an impact in the '90s for promotions in Mexico and Japan, Guerrero made the jump to ECW, where he quickly became a rising star by winning the ECW World Television Championship in his debut. It was only a matter of time before WCW came knocking and Eddie got a chance to dazzle larger crowds with both his technical prowess and aerial maneuvers.

With a new decade came greater ambition and a magnetic new persona for Guerrero as a performer in WWE. Oozing charisma from every pore, Eddie wasn't just Eddie anymore, he was "Latino Heat" – and WWE competitors soon learned this was a man who was willing to get the edge by any means necessary. All wins were equal in Latino Heat's book, even if it meant fooling a distracted referee into thinking his opponent whacked him with a chair.

Armed with a gut-busting Frog Splash, Eddie captured five different types of WWE titles, including the WWE Championship when he stunned the mammoth Brock Lesnar in a classic match at No Way Out 2004. Every Superstar from Rey Mysterio to John Bradshaw Layfield knew how taxing a rivalry with Eddie could become, especially when he had something to prove.

Even though his career was cut tragically short, Guerrero left an indelible mark on the sports-entertainment landscape. His battle cry was "Viva La Raza," but the WWE Universe to this day shouts "Viva Eddie Guerrero" in remembrance of a legend.