WWE Universe, we may have been duped.

Back in September, when current Divas Champion Beth Phoenix and Natalya went on the warpath to rid the Divas division of all the "Barbie dolls" and "perky princesses," we stood behind them. When they pushed their "pin-up strong movement," we tweeted photos and our ideas of what "pin-up strong" should be: empowering, showing people who was boss. Taking control of our own lives and destinies.

However, it seems that the evil eyes of jealousy have taken over Beth and Natalya, and the two have gone from "pin-up strong" to "pin-up wrong." 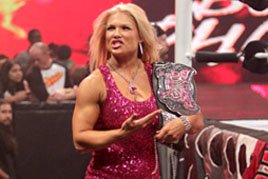 If you follow @TheBethPhoenix and @NatbyNature on Twitter, their hypocrisy has become increasingly apparent. Taunting @EveMarieTorres by stealing her ring gear, The Glamazon and third-generation Diva harped on Eve being a "model," even telling her to go model for a Kleenex campaign - Photoshopped picture included. But isn't there some irony here? Has the WWE Universe seen the progression of these dominant Divas' wardrobe? Before, they focused on the strength and unparalleled technical skills in the ring; now the two seem to be dead-set on being models themselves. From fancy dresses to a skirt in the ring, Beth Phoenix and Natalya have become exactly what they claim to hate: models.

The two also claim to know what's good for the WWE Universe. At first, we believed the words from their mouths. How couldn't we? Two strong, independent women kicking butt and taking names. Two women who seemed to "get it," and understand the plight of the outcasts, the not-so-size-zeroes, those needing to be lifted up - to find the strength within themselves. They promised us legacies. They promised us nutrition with vegetables ... they promised to lead by example.

When Natalya sat down on commentary one fateful night with Kelly Kelly, she was quick to ask the then-Divas Champion, "What do you know about legacy?" So, Beth Phoenix and Natayla, what will your legacy be? Pin-up strong, or just plain "pin-up wrong"?