As Kelly Kelly hoisted the Divas Championship – her first title ever in WWE - on Raw: Power to the People, a slight sense of vindication ran through her veins. On that Monday night in Baltimore, it wasn’t just the blonde beauty who wanted to bear gold – it was the WWE Universe who wanted to see her get that opportunity.

“The biggest compliment for me was the fans voting for me on Raw, “ Kelly Kelly told WWE.com. “I feel like the fans have really connected with me for five years. I think some might see me as the underdog – always working hard, but just never getting a chance.”

When Kelly got her chance, she capitalized on it – and the Twitter world went wild with excitement and happiness for the fan favorite. 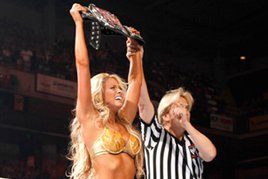 The fans weren’t the only ones lined up to congratulate the new champion, however – the respect for Kelly extended to the Divas locker room as she headed up the entrance ramp from Baltimore's 1st Mariner Arena.

“The Divas were standing there by the locker room, waiting and clapping for me,” Kelly revealed. “I’ve never been injured. I’ve worked the live events five years straight with no real off weeks. I’ve worked so hard for this, and I think the other Divas recognized that.”

The WWE Universe might also recognize that Kelly Kelly has had one of the best months ever. She was named to the Maxim 100 list of hottest women, got to “Come on down” as a presenter on The Price is Right and now she’s accomplished a dream she's had since first joining WWE.

“My life, everything is just falling into place,” the Jacksonville, Fla., native happily stated. “I feel like it’s a long time coming. I was young when I started and now I’m 24 – I really have grown up in front of everybody.”

As Kelly traveled back home, excited to show her mom and grandmother the butterfly-emblazoned title, she said there are some things she’ll have to get used to. One of them? Taking the title through airport security.

“Oh, we have a champion here!” a TSA agent said as he inspected her bag.

Yes, yes we do. And Kelly Kelly couldn’t be happier.