On Monday Night Raw, through the boos and #hoeski chants, Eve reminded the WWE Universe that she was a "woman in a man's world." Very true. The former Divas Champion went on to say that there wasn't a person in the world who wouldn't love to be used by her. Arguably, also true. So is Eve, in fact, wrong about using her "natural strengths" to get ahead?

Eve is neither the first nor the last woman inside the WWE ring - or outside - to use her sexuality to get ahead in their careers. Now one of WWE's most beloved Divas, Trish Stratus flaunted her sexuality to climb the ladder in the Divas' locker room. Stacy Keibler and Torrie Wilson also had their moments of using their God-given physiques and irresistibility to get what they wanted. In Hollywood, Marilyn Monroe was famous for telling men what they wanted to hear to get her next role. Conniving? Maybe. Did it work? Absolutely. (PHOTOS)

In 2011 sociologist Catherine Hakim wrote a controversial book called Honey Money. In it, she stated that women needed to exploit their sexuality in order to get ahead in the workplace. It was an asset nearly every woman possessed, but very few were smart enough to use. 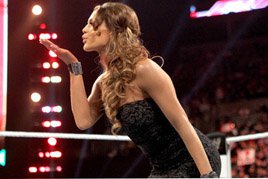 We all know how beautiful Eve is, if the stunning green eyes, the perfect athlete's body and your millions of clicks on her photo shoots on WWE.com are any indication. Yet let's not forget how smart she is. Eve graduated with honors from USC with a degree in industrial and systems engineering. She is, essentially, the complete package. As @JoeyStyles likes to tweet "@EveMarieTorres is proof that God does exist."

We often speak of equality amongst women. Equal pay. Equal opportunities. That there is still a glass ceiling, but the number of women holding high positions continues to grow. Women who have dedicated their lives to their craft with hard work, long days and many sacrifices.

The Divas division is no different, clawing their way onto TV and giving the WWE Universe OMG moments in the ring with superplexes and Superfly Splashes off the top rope. They are working hard to be on your radar. To be more than a line in results. And guess what, you're talking about Eve. She's on your radar - however dangerous that might seem with her condescending attitude in the ring.

With that, what is the problem with Eve using her sexuality to advance her career? She did, in fact, only kiss John Cena in a tense moment when the Cenation leader saved her from the maniacal Kane. She never kissed Zack Ryder. Men just can't resist her, and she knows it. Is that her fault? Does this make her a #hoeski? Or does it make her smarter than the rest of us?

WWE Raw results, May 18, 2020: McIntyre stands tall against Corbin as The All Mighty waits