George Clooney may not have taken home the Academy Award for Best Actor Sunday night. But that didn't stop him from arriving or leaving the 84th Academy Awards show with a gold, statuesque beauty in girlfriend and former WWE Diva Stacy Keibler. (PHOTOS OF STACY KEIBLER AT THE ACADEMY AWARDS)

Yes, "The Artist" won Best Picture and Best Actor statues - two categories in which Clooney and his film "The Descendents" were favored as strong contenders. Yet the media-labelled "Gorgeous George and Stunning Stacy" unquestionably stole the show, turning heads on the Hollywood red carpet, and even attracting the attention of 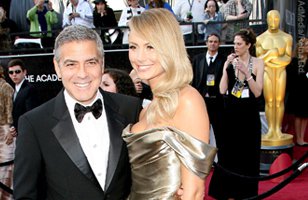 The long-legged former Diva dropped jaws and widened eyes on Hollywood's biggest night. Even as Clooney would briefly leave her side for an interview or to greet fellow stars, the cameras couldn't keep their lenses off the always-stunning Stacy. During the red carpet events before the 84th Annual Academy Awards show, her gold Marchesa gown drew the praise of fashion critics and established that the former Diva is as stylish as she is gorgeous. (WATCH)

"She looked absolutely divine," lauded host Ross Mathews during "E! Live After Party" while co-host Kristina Guerrero and supermodel Christine Tiegen described Stacy as "a goddess." The three then joked admiringly about the "attractive accessory" on her arm - that being George Clooney. (WATCH)

Oscar host Billy Crystal shared a hilarious moment in the show's opening movie-spoof montage when he shared a kiss with Clooney. Crystal later singled out Stacy, and let her know that he thought she was a lucky girl because Clooney was a great kisser. 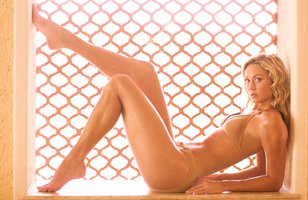 Not missing a beat, Stacy took to Twitter and responded to the legendary funny man: