Beth and Natalya Stranded After Car is Stolen!

What started as a routine “Day in the Life” feature about Beth Phoenix & Natalya ended up being like a scene straight out of COPS! Our WWE Insider was there to capture on film and Twitter as the Divas' car ride from Atlanta to Greenville, S.C., didn’t go exactly as planned. Read the exclusive recap of what occurred on I-85 as the self-proclaimed Sisters of Salvation stopped to get orange soda at a local gas station. 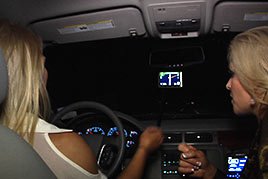 When your boss asks you if you want to ride shotgun with Beth Phoenix and Natalya to shoot footage with them about what it’s like to travel on the road as a part of WWE, the answer is “yes.”’ And when Beth and Natalya tell you that “you’re sitting in the back, because you’re a gentleman and that’s what gentlemen do, isn’t it?” you say, “of course I will.”

Maybe it’s because it was Halloween, but, I couldn’t shake the feeling that we were being followed. Of course, we wouldn’t find out that my suspicions were accurate until it was too late.

We pulled into a gas station because Beth wanted an orange soda. Yes, The Glamazon, The Goddess of the Glam Slam, likes a cold Orange Crush after crushing the competition. She whipped our rental car into a nearby gas station and quickly made her way inside. Did she leave the keys in the car? Yes. Did Natalya say something about it? Yes. Did Beth care? No. This was part of her routine. “I don’t like to slow down,” Beth said, looking back on her fatal error. ”I like to get in, get my orange soda, and get out. I don’t have time to spare in Royston, Georgia.” Of course, now we’re stuck here.

What we didn’t know, and what I would find out later through a conversation with the perpetrators of this practical joke, is that we were being followed. Alicia Fox and Eve had been tailing us since we left Atlanta. 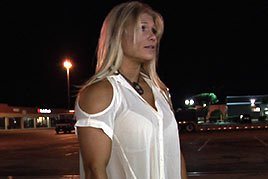 “I used to travel with Beth and Natalya a lot. Beth always drives; she always stops for orange soda and she always leaves her keys in the car. That’s her thing,” said the sly Alicia Fox, who masterminded this retaliatory prank. “Well, that, and being a total ‘B’.”

As the Divas and I walked out of the gas station, it was quickly apparent that our car was missing. The Divas did a quick, impromptu impersonation of Ashton Kutcher and Seann William Scott, and then, with the honk of a horn, Eve revealed exactly where their car was, Dude.

“It was hilarious, the looks on their faces! I’m glad your camera was rolling, because their reaction was priceless,” Eve said by phone. “Still, I’m sorry you got caught up in all this, too. Collateral damage?”

Yes, Eve drove off in our rental car. She left us at a gas station in Royston, Ga. Beth and Natalya were calmer than you might expect, although I guess what I was expecting was for them to burst into rage-induced flames. Instead, Beth asked to borrow my phone, tweeted something to Wade Barrett and handed it back to me. Then she threw her shoe at the gas station wall. It was pretty surreal. 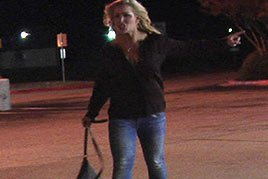 “She took my scarf!” Natalya screamed. “My Louis Vuitton scarf!”

We called WWE’s Talent Relations department, who sent a car to pick us up. Beth and Natalya both suggested that the police be contacted, but we were informed that under John Laurinaitis, all rental cars for talent are booked with multiple Superstars/Divas listed as drivers, since at any given moment a new driver might be needed to get from city to city.

“It’s a safety net, really,” said a Talent Relations representative at WWE HQ. “We never expected anyone to abuse the fact that any Diva can drive any Diva’s rental car to do something like this, but, it’s not illegal. It’s not very nice, but neither are they. I think they got what they deserved. They stole Eve’s stuff! (MORE) Hey, you’re not going to print my name or anything, are you?”

The short story is that Eve and Alicia tailed Beth and Natalya to a gas station, where Beth predictably left her keys in the car. Eve jumped out, took off with Beth and Natalya’s car, their cell phones, their clothes, and, of course, one Louis Vuitton scarf. And I was there. Watching, waiting and trying not to laugh.

Laughter may be the best medicine, but it’s not worth a punch in the face!

The Divas' Tweets from that fateful night