A former WWE Champion seems to have caught the attention of The Bella Twins. Throughout the last few months, Brie and Nikki have been seen behind-the-scenes chatting up Alberto Del Rio. On Raw SuperShow, the sisters dedicated their match to The Mexican Aristocrat. 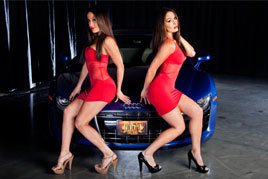 Then, WWE.com cameras caught the twins trying to sneak into the dapper Superstar's private dressing room. (WATCH) Could these be the signs of a budding romance between The Bellas and Del Rio?

“There’s a little bit of an infatuation with Alberto. He’s handsome. He speaks well. He wins. He has great cars. He’s very enticing for a woman,” Brie told WWE.com.

Nikki confirmed that she and her sister “hang out” with the former WWE Champion on a regular basis.

“He took us out for Mexican food when we were in New York. We’ve had a lot of fun times with him,” Nikki said.

“A lot of fiestas,” Brie sm

However, there seems to be one major hurdle always getting in the Divas’ way – Del Rio’s personal ring announcer, Ricardo Rodriguez.

“Ricardo is like the evil stepsister. He just doesn’t leave! I think that’s something Brie and I need to work on because we don’t like to share. We want Alberto all to ourselves,” Nikki explained.

But when it comes to sharing a love interest, The Bella Twins have been known to form a bit of a sibling rivalry. Case in point – their crushes on Daniel Bryan had the WWE Universe guessing which Bella would win his affection. While neither of them snagged Bryan, the twins’ playful rivalry intensified, just as it is already when WWE.com politely interrupted their hair and makeup session to ask them which twin they think Del Rio would choose:

Nikki: I think Alberto would definitely pick me because let’s face it, Brie, I have a lot more curves going on, and he’s a Latin man and he’s the only man who would know how to handle that. I just think I’m more his style. I think, honestly, I look better with him. The differences that I do have are what Alberto needs.

Brie: Actually, I think Alberto would look better with me because I’m more elegant. I think he would like me more than Nikki. I’ve been the Divas Champion just like he’s been WWE Champion. I just have a little more on my resume, which would fit Alberto.

Nikki: But I don’t think he’d want someone he’d think is potentially trying to overpower him because he’s a very powerful man …

Brie: I have curves, too,you know, that he likes. So it’s not about that!

Nikki: But your curves aren’t as pronounced as mine!

Brie: Well, mine are perfect. Yours are big.

Nikki: OK and is any man co 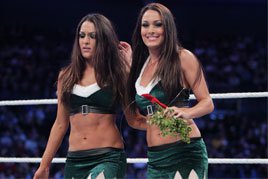 Brie: I don’t know, are they? Because I am saying Alberto isn’t complaining about mine!

Rather than continuing their debate, the frustrated twins quickly spun around back-to-back in their hair and makeup chairs, and shooed away WWE.com before their sibling rivalry really heated up.

Which Bella will capture The Mexican Aristocrat’s heart – the curvier and more aggressive Nikki, or the elegant former Divas Champion Brie, who recently won a Mistletoe on a Pole Match on the SmackDown holiday special? (WATCH | PHOTOS) Will Brie use her opportunity to kiss any Superstar to smooch Del Rio? That would surely spark some jealousy from her sister, Nikki. Or will the former WWE Champion succumb to Twin Magic and fall in love with both of the sultry sisters? Watch Raw SuperShow Monday nights at 9/8 CT on USA Network.