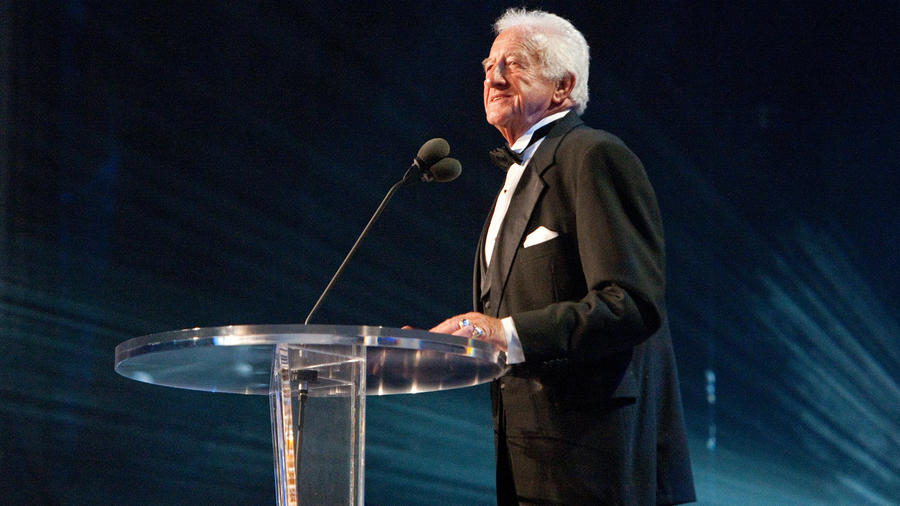 Bob Uecker's Major League career may never earn him a trip to Cooperstown, but the legendary sportscaster and not-so-legendary former ballplayer can count himself as a member of the WWE Hall of Fame.

Known affectionately as Mr. Baseball, Uecker began his career in 1962 as a catcher for the Milwaukee Braves. While the Wisconsin native has always been self-deprecating about his pro stats ("I was once named Minor League Player of the Year. Unfortunately, I had been in the majors for two years at the time," he once cracked.), he was actually a solid defensive performer and helped the St. Louis Cardinals capture a World Series Championship in 1964.

Still, Mr. Baseball's greatest success came after he hung up his cleats. Due to his quick wit and wry sense of humor, Uecker was brought on as the Milwaukee Brewers' radio play-by-play announcer in 1971. His affable personality won him many fans, including Johnny Carson, who invited Uecker onto "The Tonight Show" more than 50 times. These appearances helped the joker transition into acting where he'd find success with the ABC sitcom "Mr. Belvedere" and the "Major League" film series.

Uecker earned his place in WWE history, however, with memorable appearances at two of the biggest pay-per-view events of all time. At WrestleMania III, the former Philadelphia Phillie was the special guest ring announcer for the epic battle between WWE Champion Hulk Hogan and Andre the Giant — by far the biggest match of its era.

A year later at WrestleMania IV, Uecker would again cross paths with the Giant. While interviewing Andre backstage at the Trump Plaza, Mr. Baseball made the mistake of mouthing off to the 520-pound behemoth and ended up getting choked silly. The Eighth Wonder of the World wringing Uecker's neck became one of the most enduring images of WWE in the '80s.

Memorable moments like this earned the lovable Uecker a place in the hearts of millions of sports fans and a deserving spot in the WWE Hall of Fame Class of 2010.