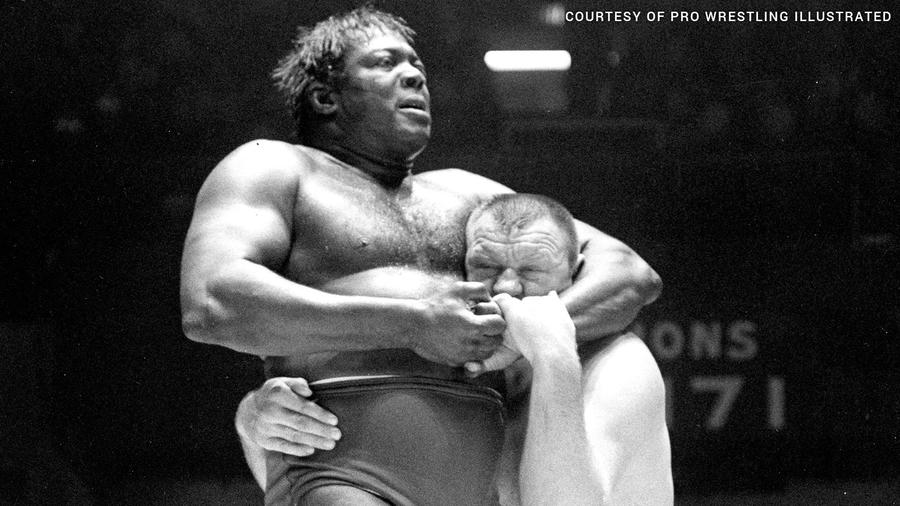 Even in the dark days of segregation, Bobo Brazil was able to transcend issues of race. African-Americans looked at him as a role model, and even spectators with racist attitudes couldn't contain themselves from leaping to their feet and cheering for the popular Superstar. Many have even referred to Brazil as the "Jackie Robinson of sports-entertainment" in response to the way Brazil and Robinson similarly broke down racial barriers in their respective sports.

Brazil, who hailed from Benton Harbor, Mich., debuted in 1951 after training with Joe Savoldi. Originally, he was to go by the name "Boo Boo" Brazil, but when a promoter made a printing mistake on an advertisement, he became Bobo Brazil and the name stuck.

Brazil made perhaps his biggest fame in the local Detroit area, where he became one of the biggest rivals of local legend and promoter and fellow WWE Hall of Famer The Sheik. Brazil and The Sheik drew each other's blood for decades, often times trading a version of the United States Championship back and forth in Michigan, Ohio and Ontario.

While life in Detroit may have seemed good for Brazil, it was tough elsewhere around the country. In Brazil's time, black fans were forced to sit in separate sections from white devotees at certain venues, and Brazil was banned from many hotels and restaurants. He handled this adversity with a dignity that inspired many of his peers to discover the same qualities in themselves.

A number of promoters would only book African-Americans against other African-Americans, fearing that any other combination could lead to race riots. Brazil thrived in these types of confrontations, beating back dangerous foes like Abdullah the Butcher and Ernie "The Cat" Ladd.

But the fans refused to settle for watching Bobo compete against a limited repertoire of opponents, and the promoters were forced to respond. Brazil was willing to take on virtually anyone. Although he spent the majority of his career as an enormously well-liked wrestler, he had no qualms about mixing it up with the other so-called "good guys." On at least one occasion, he fought to a draw with Andre the Giant -- an impressive exploit, considering their size difference. In 1970, however, Brazil made history when he teamed with El Mongol to defeat Mr. Ito & The Great Ota in the first racially-mixed match in Atlanta sports-entertainment history.

Bobo also had memorable skirmishes with such stars as Dick the Bruiser, Johnny Valentine, Haystacks Calhoun and Killer Kowalski. Despite his friendly demeanor outside the ring, Brazil was a tireless brawler who seemed to invite his opponents to break the rules in order to counter their maneuvers with his own arsenal. It was also universally acknowledged that Brazil had the hardest head in the sport, toppling rivals with his storied "Coco Butt."

Further proving that he would take on anyone, Brazil was one of the rare fan favorites to challenge Bruno Sammartino for the WWE Championship throughout the northeastern United States in the 1960s. Fans often had mixed reactions for these clashes, cheering both combatants. Washington, D.C., in particular, was a stronghold of Brazil fans. There, fellow Hall of Famer James Dudley, a WWE insider remembered for being the first African-American to run a major arena, would fire up the crowd by jogging to the ring, waving a towel as Bobo trotted behind him. After a particularly strenuous match with Brazil in Washington, "Classy" Freddie Blassie theorized that the fans would have committed murder, had Bobo asked.

Brazil retired in the 1990s after four decades in sports-entertainment, and his life after the squared circle was just as successful. He served as an advisor and mentor to Rocky Johnson in the 1980s, and in Benton Harbor, his restaurant, Bobo's Grill, became a local landmark.