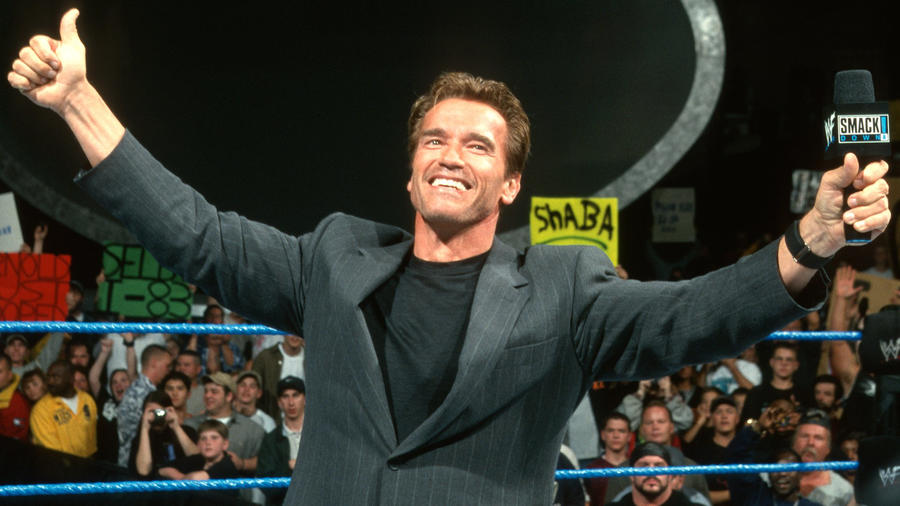 Arnold Schwarzenegger is a bona fide global icon. A box office powerhouse, world-class bodybuilding athlete and former Governor of California, the “Austrian Oak” has excelled in every industry in which he has participated, and is a true immigrant success story. No single individual represents the American dream more than Schwarzenegger.

Fond of athletics as a young boy in his native Austria, Schwarzenegger began lifting weights in the early ‘60s. The sport would make him an international phenomenon. In 1967, at just 20 years old, he became the youngest Mr. Universe in history. Moving to the United States the following year, he began training at the world-famous Gold’s Gym in Venice, California under IFBB co-founder Joe Weider. Two years later, Schwarzenegger won his first of seven Mr. Olympia titles. He met WWE mega star Bruno Sammartino at Mr. Olympia, and the two became lifelong friends. The Arnold Classic, an annual bodybuilding competition, recognizes Schwarzenegger’s iconic career in the sport.

In the 1980s, Arnold conquered the world of cinema, beginning with a starmaking turn in “Conan the Barbarian.” He followed that up with “The Terminator,” which has become perhaps the most noteworthy science-fiction action film in history. The rest of Schwarzenegger’s filmography reads like a history of movies, including “Predator,” “Total Recall” and “True Lies.” He also showed off his comedic chops in “Twins,” “Kindergarten Cop” and “Junior.” A proven, versatile performer with massive international appeal, his films have grossed approximately $4.5 billion worldwide.

In 2003, Arnold continued living the American dream when he was elected Governor of California, following in the footsteps of fellow movie star Ronald Reagan. Almost instantly christened “The Governator” thanks to his most famous film role, Schwarzenegger led his adopted state through 2010. During his tenure as governor, he declined the salary of the office.

Schwarzenegger’s involvement with WWE dates back to becoming friends with both Sammartino and “Superstar” Billy Graham more than 40 years ago and co-starring with Jesse “The Body” Ventura in “The Running Man” and the aforementioned “Predator.” On an episode of SmackDown in November 1999, Mr. McMahon presented the “World Box Office Championship” — represented by a replica WWE Title — to Arnold, who then laid out Triple H with a series of vicious punches. In 2013, he inducted his longtime friend Bruno Sammartino into the WWE Hall of Fame in Madison Square Garden. The following year, he appeared on Raw in Brooklyn, N.Y., to promote a film and nail The Miz across the jaw.

A world-renowned athlete, film powerhouse and politician, Arnold Schwarzenegger has achieved the true American dream. And on the night before WrestleMania 31, he was inducted into the WWE Hall of Fame in San Jose, California.