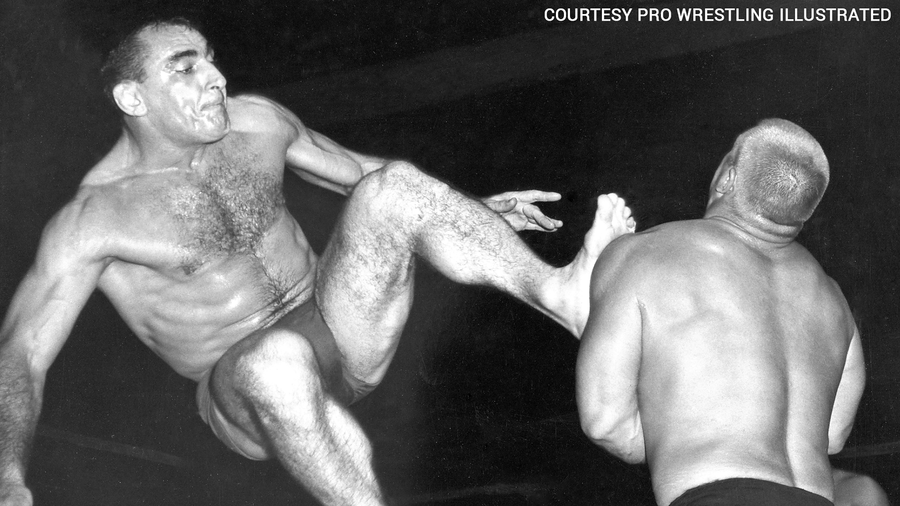 Before it was ever known as WWE, Antonino Rocca was the top Superstar in the company. Back then, it was simply the Capitol Wrestling Corporation, and Rocca was the star of the show, drawing packed houses throughout the Northeast for Vincent J. McMahon.

The reasons were simple. He was the most dynamic performer the business had ever seen up to that point. His arsenal of aerial maneuvers would be considered amazing even by today's standards; back then, he was a legitimate phenomenon. Hurricanranas, flying dropkicks, victory rolls and flying body presses dazzled 1950s audiences used to seeing athletes who almost never left their feet. His signature move, the Argentine Backbreaker (known to newer fans as the Human Torture Rack) also brought crowds to a frenzy.

The ethnic factor also played a big part. Rocca was of Italian heritage and hailed from Latin America, making him a drawing card for two of the New York area's largest populations. His fan following was passionate, as is evidenced by the famous riot that erupted at Madison Square Garden on a night in 1957 when Rocca was busted open by Dick the Bruiser.

Rocca began his career as a teenager, training under the legendary Stanislaus Zbyszko. In the United States, he began his career in Texas, but was quickly brought to New York in the late 1940s by Joseph "Toots" Mondt, the kingpin of wrestling in the Big Apple. Mondt shared Rocca with other promoters in the region, including a newcomer from Washington, D.C. named Vincent J. McMahon. Eventually, McMahon managed to convince Rocca to join his troupe full-time. This, along with his use of television, allowed McMahon to gain enough leverage to become the major player in the territory.

Although Rocca never held a World Championship, it really didn't matter. In arenas like Madison Square Garden, he was such a big deal that his matches were always main events, even if the NWA World Champion was also competing on the card; the Argentine acrobat was the man the people came to see. During this period, only Gorgeous George was a bigger star, and on the East Coast Rocca was the uncontested king.

By the time WWE was created as an independent entity outside the NWA in 1963, Rocca had already given way to Bruno Sammartino as the company's top Superstar. In the 1970s, he returned to WWE as an announcer, calling the action with a very young Vincent K. McMahon. He did this right up until his untimely death in 1977.

Antonino Rocca is sometimes left off lists of the greatest Superstars in WWE history simply because he was around before the letters were. But Rocca was the first major Superstar promoted by the McMahon family, and no such list would be complete without him. In 1995, then-WWE Champion Diesel posthumously inducted Rocca into the WWE Hall of Fame, cementing his place amongst the elite.