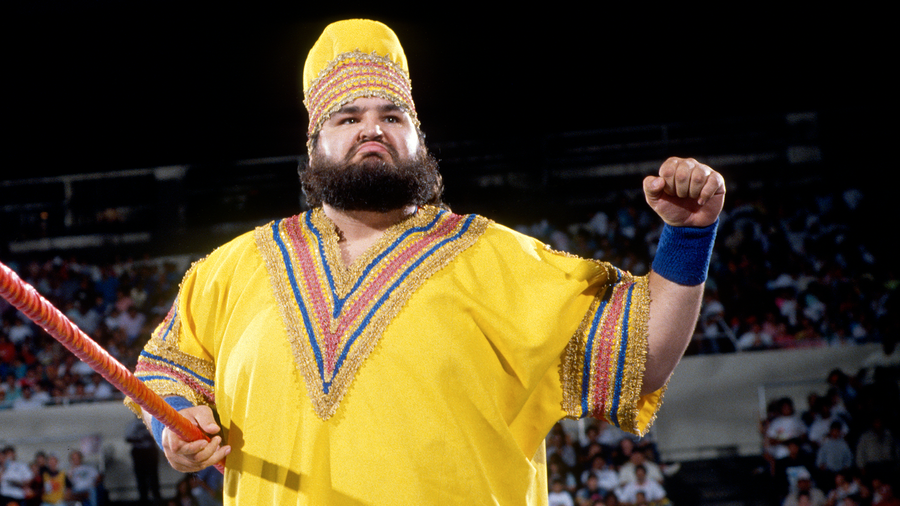 It turns out that everybody has a little soul in them, even the biggest, meanest Superstar. Just ask The One Man Gang.

The 450-pounder earned his moniker for being an unstoppable force in territories like Mid-South Wrestling and World Class Championship Wrestling. Intimidating foes with the skulls tattooed into the side of his mohawked head, The Gang didn’t need any help, as he could dispatch multiple opponents at once with his bone-crushing 747 Splash.

The One Man Gang entered WWE in 1987, making an immediate impact by ending the in-ring career of WWE Hall of Famer “Superstar” Billy Graham. Led by the nefarious Slick, the Chicago native went on a path of destruction, tearing through competition with ease. To satisfy his craving for chaos, The Gang went after WWE officials, racking up fines in tens of thousands of dollars.

While Slick was satisfied with his charge’s devastation, “The Doctor of Style” wanted the damage to come with a little flair. That’s why, in September 1988, Slick promised that a transformation would take place. He summoned “Mean” Gene Okerlund to a mysterious alley, where tribal dancers gyrated around a burning garbage can. At the crescendo of Slick’s hype job, the flame burst and The One Man Gang emerged, wearing a bright yellow shirt adorned with African patterns and one of the biggest kufi hats we’ve ever seen.

The big man boogied over to his manager and a stunned Okerlund. Slick made it clear that The One Man Gang was no more — he was reborn as Akeem. Dubbed “The African Dream,” the big man embraced his inner soul, matching Slick dance step for dance step down to the ring before squashing his hapless foes.

Akeem soon found a partner in corrections officer–turned-Superstar The Big Boss Man. The duo known as The Twin Towers wreaked havoc on WWE throughout 1989. When they weren’t trying to take the World Tag Team Titles from Demolition, Akeem and The Boss Man caused a rift in the friendship of Hulk Hogan and Randy Savage, leading to the ugly breakup of The Mega Powers.

As the 1990s rolled in, though, The Twin Towers’ partnership came to an end. After The Big Boss Man refused to be bought by “The Million Dollar Man” Ted DiBiase, the wealthy Superstar paid off “The African Dream” to take out his former friend. When the two behemoths collided at WrestleMania VI, The Boss Man emerged victorious, and Akeem left WWE shortly after.

He ditched the funky persona upon his return to WCW, going back to his roots as The One Man Gang. The mammoth grappler bounced in and out of the Atlanta-based organization over the years, capturing the United States Title along the way. He returned to WWE for the Gimmick Battle Royal at WrestleMania X-Seven before hanging up his boots for good.