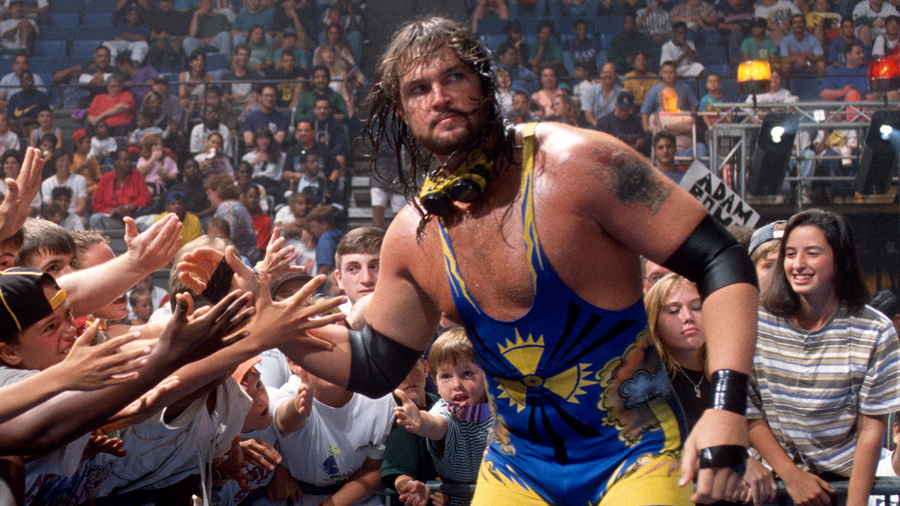 In time of war, the detonation of a nuclear weapon is considered to be a last resort. In 1993, WWE unleashed that last resort upon the squared circle. Hailing from Three Mile Island — the site of a nuclear meltdown in Pennsylvania during the late 1970s — Adam Bomb caused a mushroom cloud of destruction in his wake. But within two years of debuting, he was gone.

Introduced to WWE by preppy loudmouth Johnny Polo, the six-foot-six, 290-pound radioactive bruiser was a sight to behold with his protective goggles, a mane of long dark hair, glowing yellow eyes and a bright red tongue. The toxic monster manhandled the competition with victories over Virgil, Tito Santana and a host of others. His impressive victories even led him to a bout against top hero Bret Hart less than four months after his debut.

After coming up short in a rivalry against The Undertaker, Bomb dropped Polo as his manager and joined with Harvey Wippleman. Bomb and the diminutive Wippleman made for quite an odd couple, but it proved rewarding, as the atomic powerhouse continued to notch wins over Superstars like Marty Jannetty and The 1-2-3 Kid. Irwin R. Schyster noticed the rookie’s success and recruited Bomb for his 1993 Survivor Series team. Bomb went on an absolute tear in his pay-per-view debut and lasted the longest among the cadre of villains.

At WrestleMania X inside Madison Square Garden, Bomb suffered his most humbling defeat to date, succumbing to the monstrous Earthquake. Wippleman began to voice his frustrations with his client and the rift caused a nuclear meltdown between the duo with the sniveling Wippleman choosing to focus on his other charge, Kwang. Wippleman’s ninja battled it out with Bomb throughout summer 1994, with fans electing to side with Bomb for the first time in his career.

A newly energized and heroic Adam Bomb seemed to be more powerful than ever. He held his own against the likes of Yokozuna and The Million Dollar Corporation’s Bam Bam Bigelow and Tatanka. But after a loss to Mabel in less than two minutes on the first In Your House pay-per-view, Bomb’s nuclear reactor slowly fizzled away from WWE in 1995, leaving him to incur his wrath elsewhere.