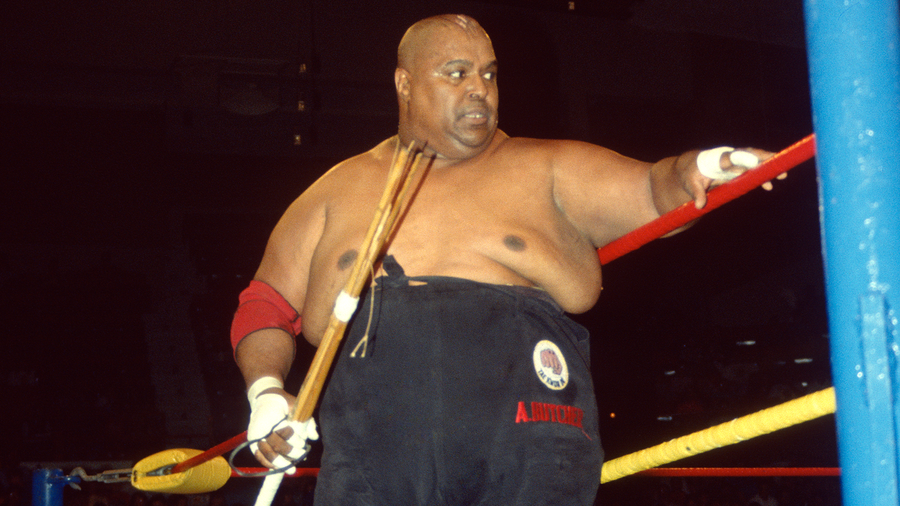 It has been said that history is written in blood. For the brutally vicious competitor known as Abdullah the Butcher, these words couldn't be more appropriate.

Internationally known as The Madman from the Sudan, the 400-pounder has terrorized opponents, officials and fans in rings across the globe for more than half a century. Whether he was competing in the grandest arenas of Japan or the dingiest high school gymnasiums in the Midwest, The Butcher attacked his opponents with an unmatched ferocity, jabbing at his victims with a rusted dinner fork and lunging at hapless spectators who dared to get too close to the monster.

In all this time, Abdullah's distinctive look has barely changed — his baggy judo pants hiked high above his bulging belly, his eyes mad and wandering like a schizophrenic, his forehead carved so deeply with scars that he can firmly insert quarters into the wounds like a coin slot.

This unique appearance and the promise of bloodshed gave The Butcher the rare ability to “pop a territory.” In the days when sports-entertainment was mostly a regional attraction, a promoter could hire Abdullah to come to town and wreak havoc for a few months. The Madman would march into Texas or Quebec with his fork in hand and slice up a local hero like Terry Funk or Jacques Rougeau Sr. Within weeks, fans would be lined up down the block to witness The Butcher and profits would explode.

If the money was right, Abdullah would be there. He battled Andre the Giant in front of 25,000 fans in Puerto Rico and clashed with Hulk Hogan in Japan. His ghastly wars with Bruiser Brody and Carlos Colón defined hardcore action decades before Paul Heyman’s Extreme Championship Wrestling exploded on the scene. The list of The Butcher’s rivals reads like a Hall of Fame itself — The Sheik, Harley Race, Bobo Brazil, Jack Brisco, Stan Hansen, Giant Baba. All these men can attest to the same fact — a champion wasn’t a champion until he came face to face with Abdullah the Butcher.

A true independent, The Butcher would never stay in one place for too long, preferring to keep on moving to the next city in search of a bigger payday. This elusiveness prevented Abdullah from ever having a big pay-per-view match, but he received some major North American exposure in 1991 with World Championship Wrestling. Introduced by Cactus Jack as a threat to Sting, The Butcher participated in the infamous Chamber of Horrors Match in which he was fried in an electric chair. It wasn’t the greatest showcase of Abdullah’s talents, but it presented him as a monster to a whole new generation of fans.

The Butcher has battled every legend in nearly every promotion on the planet — except WWE. Despite his decades in the ring, Abdullah never brawled with Hulk Hogan for the WWE Championship or went the distance with Bret "Hit Man" Hart in Madison Square Garden. These are dream matches that will never happen, but these icons were all brought together when The Butcher took his rightful place alongside them in the WWE Hall of Fame.