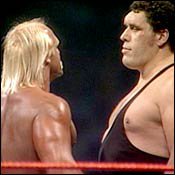 It was billed as the biggest main event in the history of sports entertainment. Hulk Hogan vs. Andre the Giant. Hogan, in his third year as WWE Champion, was set for the biggest challenge of his life in the form of the 7-foot-4, 520 pound Andre, who betrayed his former best friend in exchange for his long-awaited shot at the championship.

The Pontiac Silverdome was packed with 93,173 fans for this classic, which Andre nearly ended in about two minutes after Hogan failed at an attempted bodyslam. Eventually, Hogan would amaze the audience by slamming Andre! One leg drop later, Hogan vanquished his greatest challenge to date and beat the previously undefeated Andre the Giant.