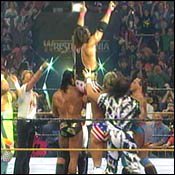 Every year, the entire country seems to catch "March Madness." People everywhere become transfixed on the men's and women's NCAA Basketball Tournaments, wondering "Who will make it to the Final Four?" To be one of the four remaining teams is an honor, but there can only be one champion.

Every spring, WWE fans catch their own "madness" when WrestleMania rolls around. On March 20, 1994 at WrestleMania X, it wasn't a "final four" but a "terrific three" who were bestowed the honor of battling it out to become the best. In the end, Bret Hart would prove to Lex Luger and Yokozuna that, although it's prestigious to vie for the gold, it's euphoric to win it.

After Bret Hart pinned Yokozuna in the main event of WrestleMania X, the majority of the WWE locker room ushered out to the ring to celebrate with Hart.