Muhammad Ali
Ali was a guest official for the night's main event. Ali is arguably the greatest professional boxer of all time. Ali has defeated the likes of George Foreman, Joe Frazier and Sonny Liston en route to a 56-4 record with 37 knockouts. 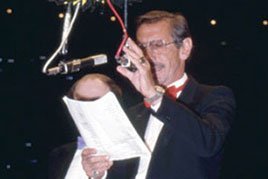 Billy Martin
Martin was a guest ring announcer. He was the charismatic manager of the New York Yankees. His no-nonsense attitude gained him wide-spread notoriety, especially in New York. 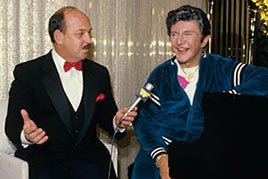 Liberace
Liberace was the guest time keeper for the night's main event. Liberace was a flamboyant piano player who was known just as much for his flashy appearance as he was for his musical talents. Liberace earned two Emmy Awards, six Gold Albums and two stars on the Hollywood Walk of Fame. 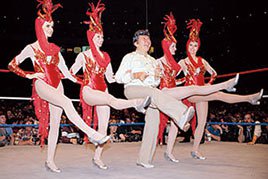 The Rockettes
The Rockettes are the leggy performers who are best known for their synchronized dance routines in the annual Radio City Christmas Spectacular. They added to the spectacle of WrestleMania by appearing with Liberace. 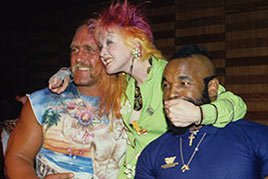 Cyndi Lauper
The eccentric recording artist, who's most popular hit is "Girls Just Wanna Have Fun," became Wendi Richter's manager and accompanied her to the ring for her Women's Championship win over Leilani Kai.