From humble beginnings growing up in West Newbury, Mass., to his nearly 10 years as a WWE Superstar, John Cena has absorbed more punishment than he’d probably care to recall. Whether he’s squaring off with The Miz & R-Truth in a Handicap Match on Raw SuperShow or competing in front of a hostile crowd, the stalwart Superstar doesn’t just shrug off animosity, he rises above it.

At Vengeance, on the same night his mission to capture Alberto Del Rio’s WWE Championship ended at the hands of the diabolical tandem known as The “Awesome Truth,” Cena’s new attire and the self-empowering message emblazoned in red, white and blue on the front – “Rise Above Hate” – provided the members of Cenation with some much-needed inspiration as their hero faced seemingly insurmountable odds.

“I wanted to make a positive statement,” Cena told WWE.com in describing his latest shirt, which features the logo of the anti-bullying “be a STAR” campaign printed on the sleeve. “I have a varied group of loyal fans out there that will literally back me through thick and thin. I’m known for crazy graphics and colors on my shirts, and I’ve pretty much run through the entire rainbow. I didn’t want the message to be drowned out with a graphic or anything like that, so we went real simple [with a black shirt] and put the words ‘Rise Above Hate’ with ‘Hustle, Loyalty, Respect’ on the back.” (PHOTOS) 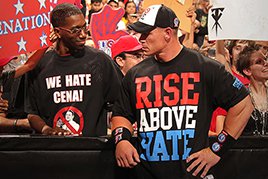 Cena continued, “It really dawned on me when the phrase ‘Never Give Up’ became popular. I’ve never really said it on TV – maybe once – but everyone kind of associated it with me because it was on my T-shirts. I get so many messages on Twitter and questions like, ‘Hey, I’m being bullied at school. What do I do?’ Those are very personal situations, and each requires a unique approach to handle, but ‘Rise Above Hate’ is a way to tell someone to be the bigger person. Because if anyone gets bullied around here [in WWE], it’s me.” (FOLLOW CENA ON TWITTER)

“The jean shorts, for the moment, have been retired,” Cena said assertively. “These are military-issued camo, and I think they will stand out. I have every U.S. Military service branch represented: Army, Marine Corps., Air Force, Navy and Coast Guard. I’ll be changing it up from time to time.”

However, Cena was quick to clarify that he hasn’t ditched the denim completely.

“They’re always in the closet,” Cena said. “Maybe when they come back in style 30 years from now I’ll bust them out for the WWE Hall of Fame or something.”

WHAT DO YOU THINK?
What’s your opinion on Cena’s new gear? Will you miss the jorts? Sound off to the rest of the WWE Universe by sharing your thoughts on Facebook and Twitter.