When your Twitter handle is something like "Ilikepuppies82" or "WWEismyfriend7654" it's pretty easy to have a moment of Twitter courage - calling out WWE Superstars and Divas in 140 characters or less, and then hiding behind an avatar.

But when your Twitter handle is @MariaMenounos with 150,000 followers reading your every Tweet and a nationally syndicated TV show, you might want to re-think calling out current Divas Champion, Beth Phoenix.

"Isn't that cute," Beth said mockingly to WWE.com with Natalya by her side. "Being the Divas Champion, I don't have time for the Greek Barbie doll's shenanigans. Time to make quick work of her at Tribute to the Troops at Fort Bragg December 13."

"Maria's never been in the 'crybaby cradle,' but she looks flexible and the perfect person to use our aloe vera, baby lotion lightly scented tissues on, " Natalya added about Menounos. "It's tear time for Maria."

Over the weekend, Maria tweeted she had been training in an outdoor ring, getting herself ready to for a potential encounter with Beth Phoenix, Natalya and the other Divas during her appearance on Tribute to the Troops 2011.

Mistake No. 1 when tweeting a Diva: Never insinuate a challenge.

Phoenix asked Menounos if her words were indeed a call to arms, and firmly reminded the Extra host that she should look back as to what happened the last time the two came face to face on Raw.

In 2009 when Menounos was Raw Special Guest Star with Nancy O'Dell, she broke the news that Phoenix had been traded to SmackDown ... and The Beauty from Buffalo wasn't happy about it.

"I slammed that Barbie doll up against the wall. She got to feel a little bit of the wrath of The Glamazon."

But Maria also remembers the nice kick and slap she got in against The Fabulous Firebird inside the squared circle, and was quick to tweet back to the pin-up strong duo, increasing the ire of Phoenix and Natalya. 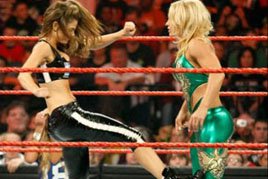 "If Maria even attempts to lace up a pair of boots and step in our ring and our world, we'll show her why we make all the other Divas cry," Beth said angrily. "I've got the tissues packed in my suitcase for Maria," Natalya added. "We bought them at Walgreens where Kelly Kelly's mom picks up her 'Pin-up Strong Illustrated' magazine."

Beth had some final words for Menounos, including a stern warning:

"Maria, we just aren't on the same page here. I keep saying, 'Maria, stay home.' Do what you do best - yappity, yap, yap yap on your little TV show and let the pin-up strong movement keep rolling forward."