LAS VEGAS – “Sin City SmackDown” lit up Las Vegas like never before, with a series of explosive specialty matches determined by the unpredictability of the roulette wheel. And when the aggressive actions of World Heavyweight Champion Daniel Bryan sent the lumberjack World Title showdown spiraling into madness, the WWE Universe was given a true taste of the bedlam the Royal Rumble Match will bring in just nine days.

When Mark Henry threw Bryan over the rope and onto the lumberjacks outside the ring, the reigning champion opted to fight the masses rather than his opponent. Then, when Henry found himself caught up with a sea of lumberjacks – as he was getting his adversary back in the ring – Bryan began throwing random kicks at everyone in sight. This incited several Superstars to enter the squared circle after him, causing the match to descend into all-out chaos. Amidst the inevitable anarchy, Bryan retreated up the ramp, with the World Title firmly in his grasp. 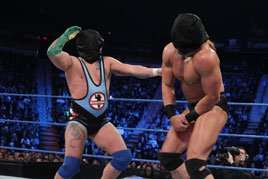 Once Bryan was clear of the action, SmackDown General Manger Theodore Long informed him that he will defend his championship in a Triple Threat Steel Cage Match at Royal Rumble against both Mark Henry and Big Show. (MATCH PREVIEW)

Santino Marella def. Drew McIntyre in a Blindfold Match (WATCH | PHOTOS)
Though SmackDown General Manager Teddy Long looked ready to fire Drew McIntyre for not living up to his contract in recent weeks, Assistant to the General Manager Santino Marella convinced him to give the Scottish Superstar another chance – facing him in what the roulette wheel would determine to be Blindfold Match, where both grapplers would have their eyes completely covered.

After McIntyre failed in his attempt to cheat his way to victory, The Italian Stallion reigned supreme – calling on the WWE Universe to guide his sightless Cobra attack, which allowed him to pick up the win. 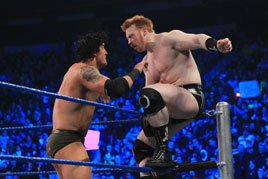 Ted DiBiase def. Hunico in a Flag Match (WATCH | PHOTOS)
In the first-ever Flag Match in SmackDown history, Ted DiBiase hit Dream Street to overcome Hunico, paving the way for him to wave the American flag proudly in triumph.

Wade Barrett def. Sheamus in a Tables Match (WATCH | PHOTOS)
Just when Sheamus looked ready to put Wade Barrett through a table with the Celtic Cross, Jinder Mahal suddenly jumped up on the ring apron. His distraction allowed Barrett to turn the tide and hurl The Great White through the table for the victory. But when Mahal tried to repeat this action in the aftermath, The Celtic Warrior got his retribution, hitting the Punjabi Superstar with the Brogue Kick before driving him into a table. 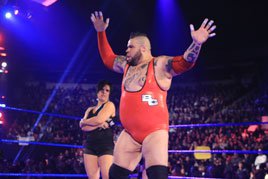 Brodus Clay def. Vickie Guerrero in a Dance Off (WATCH | PHOTOS)
In a special Sin City SmackDown Dance Off, the WWE Universe determined that Brodus Clay had the moves to put Vickie Guerrero’s “rhythmic” challenge to shame. Then, when William Regal attempted to defend Guerrero’s honor with some dignified steps of him own, The Funkasaurus ended his interruption with the thunderous “Ah-Funk-It!”

WWE Tag Team Champions Epico & Primo def. The Usos in a Tag Team Tornado Match (WATCH | PHOTOS)
This past Sunday, in a WWE Live Event in Oakland, Calif., Primo & Epico defeated Air Boom to capture the WWE Tag Team Championships. Making their return to Friday night, the high-octane duo looked ready to celebrate with a victory over the battling sons of Rikishi.

Hours before SmackDown, the stunning Rosa Mendes spun the roulette wheel on WWE.com (WATCH), determining that the new champions would face their foes in a Tag Team Tornado Match, with all four participants legal in the ring at the same time. And in the midst of the fast-paced competition that followed, Primo hit the Backstabber for the pin. 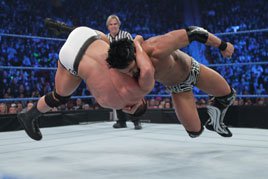 Despite Gabriel’s intense effort, which included several near falls on the Intercontinental Champion, Rhodes ultimately prevailed with the Cross Rhodes.

Daniel Bryan called for Big Show to quit
After repeating the claim he made on Raw that Big Show’s collision with AJ one week ago was no accident, Daniel Bryan declared he would dedicate his main event match against Mark Henry to his injured girlfriend. Sending a message to The World’s Strongest Man that he was not afraid of him, the World Heavyweight Champion called for Big Show to “do the right thing” and quit.