LAREDO, Texas – With just more than two weeks until the 2012 Royal Rumble, a critical mishap during an epic World Heavyweight Title rematch between Daniel Bryan and Big Show led to Diva disaster – with AJ being carried out on a stretcher.

The Daniel Bryan vs. Big Show World Heavyweight Title Match ended in a No Contest (WATCH | PHOTOS)
Amidst an extremely heated No Disqualification, No Count-out World Heavyweight Championship Match between Daniel Bryan and Big Show, The World’s Largest Athlete took off after the World Champion outside the ring. However. his offensive came to a grinding halt when the giant accidentally slammed, full-force, into a defenseless AJ, thrusting the unsuspecting Diva to the ringside floor and bringing a premature ending to the intense competition. WWE medical personnel carried the injured Diva out on a stretcher, with an openly guilt-ridden Big Show and an irate Daniel Bryan following behind. 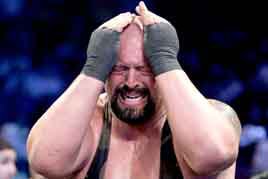 Because the match ended in a no contest, Bryan retained his championship gold. As a result, he will face Mark Henry in one week as part of a special Sin City SmackDown in Las Vegas.

Immediately after the match ended, Wade Barrett came before the WWE Universe, challenging Sheamus to a match next week as part of Sin City SmackDown. The Celtic Warrior accepted the challenge moments later.

Brodus Clay def. Tyson Kidd (WATCH | PHOTOS)
Just four days after the outrageous Brodus Clay danced his way onto Raw, the Funkasaurus busted his moves all the way to SmackDown. After setting the WWE Universe ablaze with his explosive dance entrance, the bouncing big man gyrated his way to victory in a noticeably brief match against Tyson Kidd. Just moments after the action began, Clay hurled himself at his opponent with brut force to pick up the easy three-count. 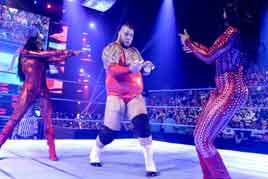 David Otunga def. Santino Marella (WATCH | PHOTOS)
David Otunga intended to come to SmackDown on business, as the Legal Advisor to Interm Raw General Manager John Laurinaitis. Little did he know he he would be placed in a match with the new Assistant to the SmackDown General Manager Santino Marella. But, when The Italian Stallion tried to unleash The Cobra on his foe, Otunga countered, hurling Santino to the canvas for the pin.

Sheamus def. Jinder Mahal (WATCH | PHOTOS)
One week after Jinder Mahal locked Sheamus in the excruciating "Punjabi Clutch," The Great White ended their fierce match-up with an earth-shattering Brogue Kick. What will happen when these two imposing Superstars clash as part of the Royal Rumble Match in 16 days? 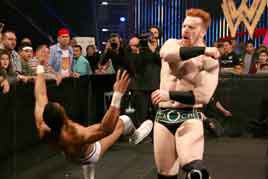 Ted DiBiase def. Drew McIntyre (WATCH | PHOTOS)
After expressing feelings of being disrespected by Ted DiBiase one week ago for never being invited to a DiBiase Posse Party, Hunico and Camacho sat in with the SmackDown announce team – watching the subject of their scorn battle Drew McIntyre. When DiBiase put the Scottish Superstar's career in further jeopardy with a Dream Street triumph, the "Low Riders" offered him mock congratulations outside the ring.

Intercontinental Champion Cody Rhodes def. Ezekiel Jackson (WATCH | PHOTOS)
Prior to his match with Ezekiel Jackson, Cody Rhodes openly insulted the Laredo, Texas members of the WWE Universe by questioning their immigration status. He also pointed out that he has held his illustrious title longer than any of the other current champion in WWE. However, the icing on the cake was his stunning proclamation for 2012, that – like The Ultimate Warrior years before – he was going to hold both the Intercontinental and World Heavyweight Titles at the same time, a quest that pledged to begin in the Royal Rumble Match. 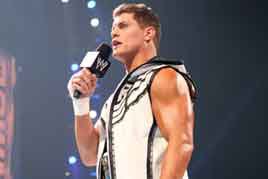 The outspoken Superstar then went on to overcome Jackson, hitting the Cross Rhodes for another huge victory. In the face of defeat, The Personification of Domination was noticeably frustrated.

Justin Gabriel def. Heath Slater (WATCH | PHOTOS)
As Heath Slater looked ready to leap off the top rope onto former WWE Tag Team Champion cohort Justin Gabriel, Hornswoggle appeared from under the ring and laid down on the canvas in front of him. This momentary distraction allowed Gabriel to regain the advantage and defeat The One Man Southern Rock Band with the 450 Splash.

Following the match, ‘Swoggle celebrated with Gabriel in the ring, running over Slater several times in the process. 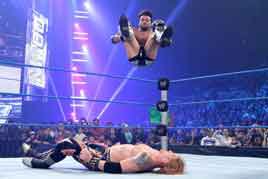 Mark Henry will face the winner of SmackDown's World Title Match main event (PHOTOS)
One week after Daniel Bryan earned a controversial victory by disqualification over Big Show, the World Heavyweight Champion denied accusations that he "goaded" Mark Henry into pushing him in order to get out of the title match in one piece. He instead suggested that The World's Strongest Man needed to be suspended for his actions.

Henry emerged to inform Bryan that, by authority of SmackDown General Manager Theodore Long, he himself would be banned from ringside for the No Disqualification/No Count-out World Title main event between the reigning champion and The World's Largest Athlete. The former World Champion also revealed that as long as he honoring that ban, Teddy Long would give him his own World Title rematch against the winner next week.