GREENSBORO, North Carolina – With the 2011 WWE Draft over and Edge retired, Randy Orton wasted no time making an impact on the blue brand. He heralded in his arrival on Friday nights by dropping Drew McIntyre, Alex Riley and Brodus Clay with stinging RKOs.

Randy Orton & Christian def. Alberto Del Rio & Brodus Clay (WATCH | PHOTOS)
If there was any question about what impact Randy Orton would make on SmackDown, he quickly made it known that he is a force to be reckoned with. In the night’s main event, The Viper downed big Brodus Clay to help secure a win for his team. Will Orton and Christian carry this momentum into their respective matches this Sunday at Extreme Rules? (Extreme Rules coverage)

Layla vs. Michelle McCool ended in a Double Disqualification (WATCH | PHOTOS)
The tensions boiling within Team Lay-Cool finally erupted in a match pitting the two Divas against each other. After fighting tooth-and-nail outside the ring, their match ended in a Double Disqualification. Afterward, Layla challenged Michelle to a match at Extreme Rules. Michelle accepted, under the condition that it would be a Loser Leaves WWE Match. (Preview)

Rey Mysterio def. Mark Henry by Disqualification (WATCH | PHOTOS)
After being drafted to Raw, Rey Mysterio was looking to leave SmackDown in style in a match against formidable opponent Mark Henry. After a competitive bout, Mysterio looked well on his way to victory after downing The World’s Strongest Man with the 619. However, just as Mysterio was poised to capitalize, Cody Rhodes rushed into the ring and launched a vicious assault. The ugly attack spilled into the WWE Universe, and finally back into the ring, where Rhodes shoved a paper bag over Mysterio’s head. Who will prevail when the bitter rivals collide at Extreme Rules? (Preview) 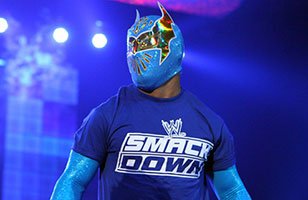 Sin Cara def. Jack Swagger (WATCH | PHOTOS)
After being attacked by Sin Cara three weeks ago, Jack Swagger was looking for some payback. When Michael Cole handed Swagger a mysterious object, it looked as if The All-American American was going to use it against Sin Cara. However, the high-flying new Superstar proved too quick for Swagger and wrapped him up for the pinfall. Afterward, Sin Cara launched himself from the top rope onto the still-reeling Swagger.

United States Champion Sheamus vs. Kofi Kingston ended in a No Contest (WATCH | PHOTOS)
United States Champion Sheamus rushed into the arena, taking down Kofi Kingston from behind before their match even began. The brutality continued inside the ring, as the 2010 King of the Ring pummeled Kingston, leaving him in a lifeless heap. Certainly, the entire SmackDown locker room took notice of the brand’s newest, dangerous competitor.

Randy Orton RKO'd Drew McIntyre and Alex Riley (WATCH | PHOTOS)
When Randy Orton kicked off the night by introducing himself to the SmackDown audience, a slew of Superstars wanted their chance in the spotlight. However, The Viper quickly asserted his dominance with a pair of devastating RKOs to Drew McIntyre and Alex Riley. When Alberto Del Rio and Brodus Clay came calling, Christian rushed to Orton’s side. Before an all-out brawl, SmackDown General Manager Theodore Long arranged for the foursome to officially meet in the night’s main event.