Alberto Del Rio threw a Retirement Party for Edge (WATCH PART 1 | PART 2 | PHOTOS)
One week after Edge's forced retirement from WWE, Alberto Del Rio ridiculed the 11-time World Champion with a mock Retirement Party. His "presents" included a grandfather clock for Edge to watch his life tick away, adult diapers, a "heavier" version of former WWE Diva Lita for companionship, a walker and even a mobility scooter, complete with handicap parking pass.

Moments later, The Ultimate Opportunist himself surprised both Del Rio and the WWE Universe, emerging to humorously address the "party poopers." When Brodus Clay stomped up the ramp to take him out, Christian emerged from under the ring, striking his aristocratic adversary's protégé with a ladder. After slamming Del Rio into the barricade, Captain Charisma climbed the rungs of destiny in the center of the ring, grabbing the vacant World Heavyweight Championship suspended high above the London masses. Will the same thing happen when Christian faces his elitist foe at Extreme Rules in nine days? (Preview) 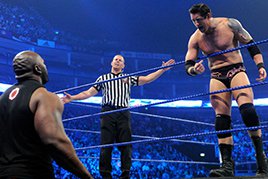 Intercontinental Champion Wade Barrett def. Kofi Kingston in an Intercontinental Championship Match (WATCH | PHOTOS)
When Ezekiel Jackson leveled Wade Barrett – presumable trying to attack his fellow Corre member's challenger Kofi Kingston – the English Superstar told him to leave ringside. Then, in the heat of battle, Barrett blasted his high-octane opponent with a brutal kick. When Kofi tried to counter the champion's follow-up assault, Barrett used his presence of mind – and the nearby ring ropes – to trap Kingston, grabbing the three-count to successfully defend his Intercontinental Title.

Drew McIntyre def. Chris Masters (WATCH | PHOTOS)
After preventing Chris Masters from cinching in the Master Lock – by kicking off the ropes and sending his chiseled opponent crashing backward to the canvas – Drew McIntyre executed the Future Shock DDT for the impressive win. 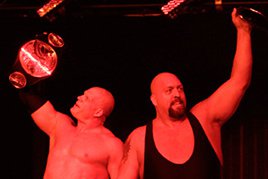 Michelle McCool and Layla attended another couples therapy session
The dysfunctional turmoil between Team LayCool personified itself during the second week of their couples therapy. Click here to watch.

Rey Mysterio def. Cody Rhodes (WATCH | PHOTOS)
Prior to an extremely personal WrestleMania rematch with Rey Mysterio, a very biter Cody Rhodes handed out paper bag masks to the London members of the WWE Universe, urging them to hide all their lying eyes and their ugliness. (WATCH) 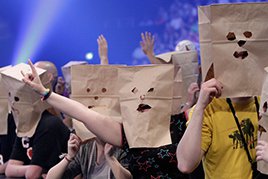 Although The Ultimate Underdog used his incredible athleticism to pick up the quick pin on the self-conscious Superstar, Rhodes unleashed a vicious attack on The Master of the 619 after the bell, initiating a brutal battle between them that spread all through the United Kingdom crowd. The carnage ended when the second-generation Superstar hit Mysterio with a devastating Cross Rhodes onto the hard ringside floor.

It was later announced that the explosive rivalry between Mysterio and Rhodes will be settled in a Falls Count Anywhere Match at Extreme Rules. (Preview)