CHARLOTTE, North Carolina – In the wake of WrestleMania, SmackDown moved to the “Extreme,” as Alberto Del Rio snatched the opportunity to take on World Heavyweight Champion Edge in a Ladder Match at Extreme Rules.

Alberto Del Rio def. Christian in a No. 1 Contender’s Match (WATCH | PHOTOS)
With 11-time World Champion Edge sitting in with the SmackDown announce team, Christian battled Alberto Del Rio for the right to become the No. 1 contender to the World Heavyweight Title and take on The Rated-R Superstar at Extreme Rules. When Captain Charisma became momentarily distracted by Edge’s Spear to Brodus Clay outside the ring, Del Rio seized the moment, leveling his opponent with a kick to the back of the head to pick up the monumental three-count. Del Rio will now face The Ultimate Opportunist in a Ladder Match at Extreme Rules. (Preview) 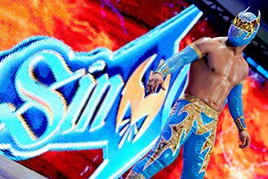 Sin Cara flies high (WATCH | PHOTOS)
As Michael Cole and Jack Swagger were singing their praises from their nefarious actions at WrestleMania, WWE’s explosive new Superstar Sin Cara emerged, defying both gravity and logic with a jaw-dropping attack on The All-American American.

Beth Phoenix & Kelly Kelly def. Michelle McCool & Layla (WATCH | PHOTOS)
When Michelle McCool was hurled into the ropes by Beth Phoenix, her momentum knocked Layla off the apron. As a result, the English-born Diva was unable to tag in when Michelle came calling. Later, when Layla was trying to tag Michelle in, a sudden “back issue” kept the first-ever Divas Champion from relieving her partner-in-flawless, allowing Kelly Kelly to pick up the quick victory. As the dust cleared, the animosity between the members of Team Lay-Cool was noticeable.

Cody Rhodes def. Trent Barreta (WATCH | PHOTOS)
When Cody Rhodes was kicked in the face by Trent Barreta, the jaded Superstar completely snapped, unleashing a bitter assault on his opponent that culminated with the Cross Rhodes for the win. After the bell, Rhodes turned his protective facemask into a weapon against Barreta, prompting Rey Mysterio to storm to the ring and nearly snatch the facemask off his emotionally-scarred adversary. 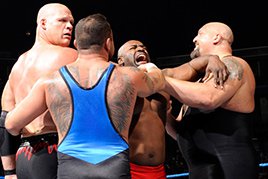 (WATCH | PHOTOS)
In an Eight-Man Tag Team 2-out-of-3 Falls Match, Kofi Kingston used a high cross body on WWE Tag Team Champion Justin Gabriel to score the first fall. Following a devastating boot to the face of Santino Marella, Intercontinental Champion Wade Barrett hit The Italian Stallion with Wasteland, tying the match at one fall a piece. As Kane was preparing to finish Barrett with a chokeslam, The Corre’s use of excessive force brought the disqualification, giving their opponents the third fall and the overall victory.

The Corre was then treated to a post-match onslaught by their triumphant adversaries, culminating in a triple chokeslam on Ezekiel Jackson by Kane, Big Show and Santino.

Edge spray painted Alberto Del Rio’s Rolls Royce (WATCH | PHOTOS)
After Alberto Del Rio’s WrestleMania moment of destiny – and his Rolls Royce Silver Spur worth $120,000 – were destroyed by Edge, the aristocratic Superstar returned to SmackDown gunning for more. He proclaimed that destiny can be delayed, but not stopped. The Master Manipulator interrupted him, rolling in on a tow truck containing Del Rio’s ruined luxury automobile. The Ultimate Opportunist opted to add insult to “auto”-injury, spray painting his elitist foe’s fancy ride. 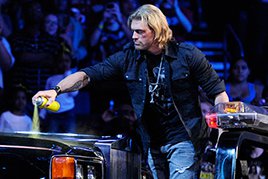 Although an outraged Del Rio demanded another title match, Edge responded that Christian deserved it more, since Captain Charisma had defeated Del Rio in singles SmackDown matches two weeks in a row. Before things turned physical, SmackDown General Manager Theodore Long created a main event No. 1 Contender’s Match between Christian and Del Rio. The winner would face Edge at Extreme Rules in a Ladder Match.