The Miz is a guest-star smash on USA Network's "Psych"

Didn't take much of a psychic to know that Psych star James Roday was going to be a great guest host on Monday's Raw SuperShow, and it doesn't take one to know that The Miz's appearance on Psych this past Wednesday on USA Network was just as "AAAAWWEEESSSOOOOMMMEEE." Only two days after Roday made his long-delayed debut as a Raw guest-star, The Awesome One returned the favor and dropped by the hit detective comedy as a guest-star. 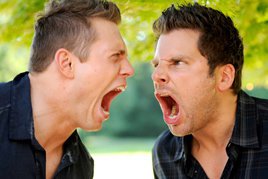 On USA Network's popular show - currently in its sixth season - Roday plays Shawn Spencer, a man with highly-trained powers of observation who poses as a psychic to help solve crimes for the Santa Barbara Police Department. The show has featured WWE Superstars as guests before, including John Cena in the 2010 episode "You Can't Handle This Episode." The Miz appeared in the March 14 installment, titled "Shawn and the Real Girl," where he played a meat-headed reality TV show contestant being investigated by Shawn and his partner.
(VIEW PHOTOS OF MIZ AND RODAY ON THE SET OF PSYCH)

Likewise, was not the first time Roday has lent his considerable talents to WWE. A self-professed member of the WWE Universe,
the actor had been slated to guest-star on Raw in 2010, alongside co-star Dule Hill. However, a last-minute appendectomy forced him to cancel. (Hill, however, still appeared, and memorably ran afoul of Alicia Fox after wrongly predicting she would win her match that night.) Roday also appeared on an episode of "WWE Tough Enough" in 2011.