WWE Raw SuperShow results: From The Best Ones to The Great Ones

PORTLAND - With The Road to WrestleMania fully underway, The Rock returned to Raw SuperShow to address his WrestleMania opponent John Cena. Also, the tension between SmackDown General Manager Teddy Long and Interim Raw General Manager John Laurinaitis continued to intensify with rumors circulating about the state of both brands. Also, the rivalry between Chris Jericho and WWE Champion CM Punk reaches a boiling point with both Superstars ready to prove who is the best in the world.

The Rock addressed the WWE Universe (PHOTOS | WATCH)
The Great One returned to WWE Raw SuperShow to remind the WWE Universe that without them, The Rock would never exist. The Brahama Bull then turned his attention to his WrestleMania XXVIII opponent John Cena. The Rock had many choice words for John Cena and whenever he hurled an insult at his WrestleMania opponent, the Portland crowd would chant in unison. The Great One explained to John Cena that he was fighting for the people and that he lived to entertain the people. As The People's Champion continued, John Cena made his way to the ring to counter The Rock's insults and fire back his own. When Cena left, The Rock said it didn't matter what Cena said, at WrestleMania, both Superstars would put everything on the line. To watch The Rock's address, play the video above.

The Board of Directors will have a special announcement about Raw SuperShow and SmackDown at 10 AM EST on WWE.com (FULL STORY) 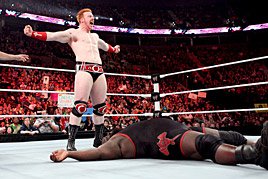 Sheamus & Big Show def. Mark Henry & Intercontinental Champion Cody Rhodes (PHOTOS | WATCH)
Before the contest began, Intercontinental Champion Cody Rhodes took the opportunity to mock Big Show and remind him of his loss to the 150-pound boxer Floyd Mayweather at WrestleMania XXIV (WATCH). As Rhodes and Big Show prepared to start the match, the Intercontinental Champion immediately tagged in Mark Henry. The World's Strongest Man didn't even have a chance to enter the ring before The World's Largest Athlete unleashed his fury. Mark Henry never had a chance to recover as he was run over by Big Show. However, Big Show turned his attention to Cody Rhodes who left ringside and retreated up the entrance ramp. This allowed Henry a chance to recover, but Sheamus tagged himself in and took down The World's Strongest Man with a powerful Brogue Kick for the win.

After she left the ring, Kelly Kelly confronted Eve and asked her what has gotten into her. Eve responded by laughing in Kelly's face and walking away.

WWE Tag Team Champions Primo & Epico def. Kofi Kingston & R-Truth and Dolph Ziggler & Jack Swagger (PHOTOS)
In perhaps their most impressive WWE Tag Team Championship defense yet, Primo & Epico managed to defeat two formidable teams in a Triple Threat Tag Team Match. Early on in the contest, Kofi Kingston's fast-paced offense seemed to be too much for his opponents to handle. However, in a contest with so many talented Superstars and strong pairings, no one could maintain momentum for too long. Each tag team seemed poised to outdo the other on their way to the tag team titles. However, Primo & Epico's teamwork was what ultimately led them to victory leaving the WWE Universe with no doubt as to why they are the WWE Tag Team Champions.

The celebration for Primo & Epico was short-lived as the entrance way exploded in a burst of fire and Kane made his return to Raw SuperShow. The Big Red Monster made his way to the ring and laid out every Superstar involved in the contest. Although Primo & Epico retained their titles, an enraged Kane spread his message of hate at their expense. 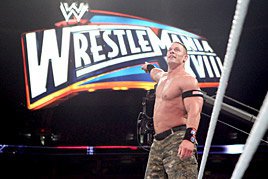 John Cena def. The Miz (PHOTOS | WATCH)
Nearly a year removed from their epic clash at WrestleMania XXVII, John Cena battled The Miz on WWE Raw Supershow. Before the contest was underway, The Miz needed to get something off his chest. The Miz claimed that no one has worked harder than he has, but yet he is upset because he does not have a match at WrestleMania. The Miz was fully prepared to prove he was ready for WrestleMania by defeating the same Superstar he defeated at The Show of Shows last year.

When The Awesome One was done talking, the opening bell rang and the two Superstars immediately collided. Both Cena and The Miz has something at stake in this contest. Somewhere, The Rock was watching John Cena's every move, no doubt studying Cena's style and strategy. For The Miz, this was a great opportunity for him to prove he is ready to main event another WrestleMania. Momentum swings were fairly even in the contest, but Cena's offensive continually proved to be much more effective. Following an Attitude Adjustment, Cena locked Miz in the STF for the victory.

As Cena celebrated his victory, The Rock appeared on the TitanTron and simply waved his hand across his face, mocking his WrestleMania opponent.

Kelly Kelly def. Nikki Bella (PHOTOS | WATCH)
No doubt thinking about the recent actions of her friend Eve, Kelly Kelly squared off against Nikki Bella on WWE Raw SuperShow. The lovely Divas battled back and forth and each showed off impressive displays of athleticism. As Kelly Kelly built a fair amount of momentum, Brie Bella tried to distract the blonde bombshell, perhaps attempting Twin Magic. Kelly knocked Brie off the apron, but was rolled up by Nikki. However, Kelly Kelly proved why she is one of WWE's top Divas and reversed the pin into one of her own to secure the victory. 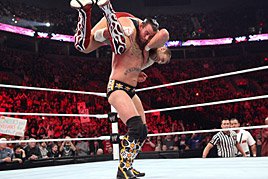 WWE Champion CM Punk vs. World Heavyweight Champion Daniel Bryan ended in a No Contest (PHOTOS | WATCH)
Not to be outdone by SmackDown General Manager Teddy Long, Executive Vice President of Talent Relations and Interim General Manager of Raw John Laurinaitis decided to kick-off the final WWE Raw of February with a rematch between WWE Champion CM Punk and World Heavyweight Champion Daniel Bryan. After Chris Jericho and CM Punk's heated exchange, Bryan made his way to the ring. A distraction from Mr. Laurinaitis before the opening bell allowed Bryan the early advantage but CM Punk quickly ran the World Champion out of the ring.

With the match officially underway, the WWE Universe was treated to another competitive match-up between WWE's best. The action spilled in and out of the ring under the close observation of both General Managers. However, both Punk and Jericho seemed to know each others style of competition very well. With both champions reeling from a collision inside the ring, chaos ensued on the outside. Santino Marella and David Otunga found themselves in a minor skirmish that was broken up by Mr. Laurinaitis. As Teddy Long, Laurinaitis and the official argued on the outside, Daniel Bryan tried to make an escape.

As the World Heavyweight Champion walked up the entrance ramp, Sheamus attacked, tossing Bryan back in the ring. This assist from The Celtic Warrior allowed the WWE Champion to execute the GTS on Daniel Bryan. However, before the official could make the count, Mr. Laurinaitis ran in the ring and prevented Punk's victory. This resulted in a confrontation between Laurinaitis and Long. With the match seemingly called off, CM Punk walked away from the ring. As he proudly displayed his title, the WWE Champion was brutally attacked by Chris Jericho.

Chris Jericho confronted WWE Champion CM Punk (PHOTOS | WATCH)
Ready for his Champion vs. Champion rematch against World Heavyweight Champion Daniel Bryan, WWE Champion CM Punk was faced with his WrestleMania XXVIII opponent Chris Jericho. WWE's first-ever Undisputed Champion had one message for CM Punk: Chris Jericho is "the best in the world at what he does." However, as Jericho ranted, pleading his case, CM Punk remained unfazed and went on the attack. Claiming that Jericho has a "Napoleon complex," The Voice of the Voiceless questioned if Jericho wasn't trying to prove to the WWE Universe that he was the best in the world, but trying to prove it to himself.

Jericho continued to claim that even while he was away on "Dancing With the Stars," he would watch Punk rip him off. Yet Punk countered that all Jericho ever had to do was challenge him at WrestleMania rather than attack him on Raw. Punk ended the confrontation promising that he would remain WWE Champion and the two Superstars could put on the "greatest wrestling match in WrestleMania history."

Raw: The Rock responds to John Cena and weighs in on their WrestleMania showdown