John Cena has been doing his best to keep his cool. In the face of Kane trying to force him to embrace the hate and The Rock constantly mocking him over social media as their WrestleMania XXVIII showdown quickly approaches, the leader of the Cenation has been remarkably calm. 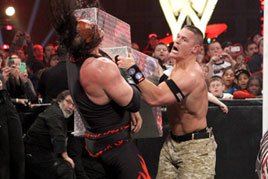 Sometimes, though, such relentless insults and attacks have to overwhelm a Superstar with rage. Cena’s vicious assault on Kane a week ago on Raw SuperShow, when he sent The Big Red Monster reeling with the steel ring steps, showed that the former World Champion isn’t afraid to unleash animosity on the unlucky person who dares stand in his way. (WATCH)

Now Cena and Kane are scheduled to face each other in what is sure to be a brutal Ambulance Match at Elimination Chamber. It’s the first time in nearly a decade since WWE held its last such contest, one in which Kane emerged victorious. Furthermore, The Big Red Monster has been nigh-unstoppable since re-donning the mask and reappearing last December. However, if Cena’s past actions against literally some of his biggest rivals are any indicator of what is to come on Feb. 19, The Devil’s Favorite Demon is in for one tough night.

As Elimination Chamber approaches, take a look back at the moments when John Cena unleashed a pent-up rage most never thought he possessed. (PHOTOS) 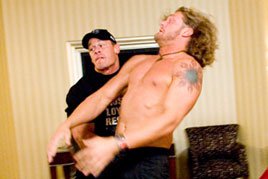 Raw, July 10, 2006
A Different Kind of Room Service
Without question, one of Cena’s biggest rivals has been The Rated-R Superstar, Edge. After brawling with the leader of the Cenation earlier that evening, The Ultimate Opportunist retreated to his hotel room with Lita to grab some champagne and celebrate his recent WWE Title victory. The two believed a knock at their door was room service. When Edge opened it, though, he found John Cena on the other side, abruptly ending the celebration. (WATCH)

Raw, Aug. 21, 2006
Edge Goes for a Swim
If there was one thing Edge did better than most, it was knowing how to press John Cena’s buttons. On this August night, Edge and Lita tossed the WWE Championship the leader of the Cenation created into the Long Island Sound, unveiling his own custom “Rated-R” title. Later, while Edge competed against Jeff Hardy, Cena cut the match short, battling Edge to the docks outside The Arena at Harbor Yard in Bridgeport, Conn. Before long, the WWE Universe soaked in the moment as Edge ... well, he just soaked. (WATCH) 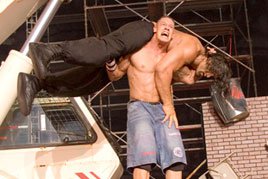 One Night Stand 2007
Slaying the Giant
John Cena has found himself across the ring from monsters of all shapes and sizes. One of the largest was The Great Khali, a Punjabi giant who could manhandle any Superstar at will. After a controversial WWE Title Match at Judgment Day, where Khali submitted to the STF, though the referee failed to notice his foot was under the rope, the monster earned a rematch. It took all of Cena’s fury to overcome his massive opponent at One Night Stand in a Pinfalls Count Anywhere Match. Cena took the battle to a crane near the stage area and delivered a gargantuan  Attitude Adjustment, sending Khali crashing to the arena floor. (WATCH) 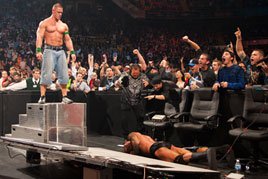 Bragging Rights 2009
Cena’s Iron Will
John Cena and Randy Orton are two of the most decorated Superstars in WWE history. With 21 World Title reigns between the two warriors, the race to be considered the best is neck and neck. In October 2009, Cena and Orton met in a grueling, 60-minute Anything Goes Iron Man Match for the WWE Championship. The Viper had a 5-4 lead with less than 10 minutes left, leaving Cena desperate to even the score and capture the title. As the final seconds ticked away, the frustrated Cenation leader suddenly  grabbed Orton and violently threw him through the announce table, leaving The Apex Predator in a heap of rubble. (WATCH) 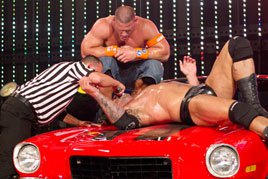 Over The Limit 2010
Running in the Red
In this vicious “I Quit” Match, Batista threw virtually everything at John Cena, battering Cena all over. With Cena grounded on the stage of Detroit’s Joe Louis Arena, Batista took advantage of a nearby prop car, attempting to run over the Cenation leader. Cena avoided the vehicle and went into overdrive, however, furiously attacking The Animal. He grabbed his foe and climbed to the roof of the car. With the threat of an AA onto the stage, a startled Batista quickly screamed the two most embarrassing words a Superstar can utter. Not satisfied with just the win, though, Cena went ahead anyway, giving Batista a hellacious Attitude Adjustment off the car and through the stage. (WATCH)

Raw, Dec. 6, 2010
Cena Serves Nexus Dinner
Wade Barrett and The Nexus manipulated the firing of John Cena from WWE in late 2010, but that didn’t stop him from being a persistent thorn in their collective side. David Otunga, being interviewed via satellite from his hotel room, detailed the faction’s plans for the leader of the Cenation. Otunga put the questioning on hold to get his room service. Dissatisfied with the temperature of his burger, Otunga sent the bellhop away, only to hear another knock at his door. Cena popped in and laid out the Harvard Law grad and his Nexus cohorts, sending a clear message to Barrett. (WATCH) 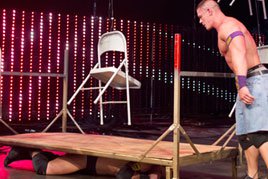 WWE TLC 2010
Seating for One
John Cena was focused on settling the score with Wade Barrett in a Chairs Match in December 2010. After brutalizing his foe and picking up the victory with an Attitude Adjustment through a pile of chairs, the Cenation leader wanted closure for the months of torture at the hands of Barrett and his Nexus followers. Cena took the bare-knuckle brawler to the stage, where dozens of chairs hung from the arena ceiling. Barrett, trapped under a wooden cart, could do nothing as Cena yanked down on the chain of chairs, sending the cold steel tumbling down onto his foe. The brutal act ensured that Barrett would never forget the night he faced John Cena. (WATCH)