KANSAS CITY, Mo. – With the Road to WrestleMania officially underway, Undertaker wasted no time making his intentions known – he has sights set on Triple H and The Grandest Stage of Them All. The stunning return left the status of John Laurinaitis' role as Interim Raw General Manager in question.

The Undertaker interrupted John Laurinaitis’ performance review to confront Triple H (WATCH | PHOTOS)
As John Laurinaitis gave himself high job ratings, WWE COO Triple H came out to call the Interim GM a spineless backstabber. After making him sweat out what his fate would be – including hinting at a Gauntlet Match and joining the legendary Kiss My Ass Club – The Game said he was going “to do what needs to be done.” But just as it sounded as if Triple H were going to wish Laurinaitis well in his future endeavors, The Undertaker’s ominous gong sounded, announcing his dark presence. 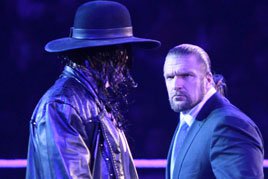 As The Phenom made his way to the ring in front of a shocked WWE Universe, Triple H stood equally as stunned. As the two sized each other up, The Phenom signaled for Triple H’s demise, while focusing his dark gaze on the WrestleMania XXVIII banner high over head. After some intense moments with no words spoken, The Gamed patted Undertaker on the shoulder and walked out of the ring.

Following the dramatic stare down, what is going through Triple H's mind? Why did he walk away? Is John Laurinaitis fired? Sound off now at WWE InterAction.

WWE Divas Champion Beth Phoenix def. Eve in a Divas Championship Match (WATCH | PHOTOS)
After WWE Divas Champion Beth Phoenix quickly dispatched of Eve with the Glam Slam, Kane appeared on the arena screen to recall how he injured Zack Ryder at Royal Rumble (MORE). Calling out Cena for not embracing hate, The Big Red Monster said Ryder’s injuries could have been avoided. Looking toward WrestleMania, Kane declared “Until Cena truly embraces the hate, he can’t beat me and he can’t beat The Rock.” (CENA VS. ROCK PREVIEW) 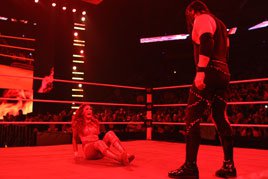 With Eve focused on the arena screen, Kane stunned everyone and appeared at ringside. As he stalked Eve in the ring, the leader of the Cenation rushed in to confront The Big Red Monster. Full of emotion, Cena brutally attacked Kane, smashing him with the steel rings steps three times. But as he prepared to hit the Attitude Adjustment on the announce table, The Devil’s Favorite Demon managed to escape and flee into the WWE Universe. 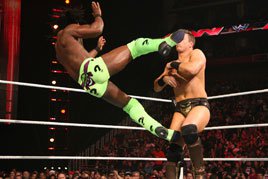 Kofi Kingston def. The Miz (WATCH | PHOTOS)
Despite The Miz’s respectable performance lasting the longest in the Royal Rumble Match (PHOTOS), he could not find a way to overcome the high-flying Kofi Kingston who stunned The Awesome One with Trouble in Paradise. 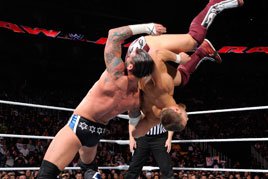 In a highly competitive bout, two of WWE’s best went toe-to-toe in their first one-on-one match in WWE. But before either Superstar could put the other away, Chris Jericho charged in and pulled Daniel Bryan from the ring, causing the match to end in a disqualification. With Bryan down and Punk vulnerable after the hard-fought match, Jericho blasted the Straightedge Superstar with the Codebreaker. 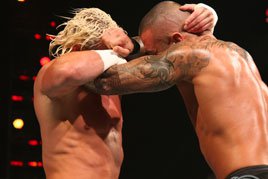 Randy Orton def. Dolph Ziggler (WATCH | PHOTOS)
Earlier today, Dolph Ziggler confronted John Laurinaitis about last night’s WWE Championship Match at Royal Rumble and demanded a rematch (WATCH EXCLUSIVE). Following up on a solid effort in the Royal Rumble Match, Randy Orton returned to action for the first time in six weeks, as the Superstar who put him out of commission, Wade Barrett, watched from a skybox. With a blistering offense, The Viper took it to Ziggler and defeated him with an RKO. 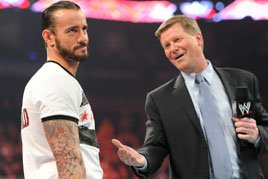 After the GM’s announcements, Punk led the WWE Universe in singing “Nah Nah Nah Hey Hey Hey Goodbye.” Next, after Punk and the GM traded verbal barbs, World Heavyweight Champion Daniel Bryan emerged to tout his accomplishment at the 25th anniversary of Royal Rumble. Then after the two champions mixed heated words, the 2012 Royal Rumble Match winner Sheamus came out to remind them that he earned the right to be in the main event of WrestleMania – where he boldly proclaimed he will become the WWE or World Heavyweight Champion.