Darkness fell upon Raw SuperShow on Monday night and the WWE Universe couldn't be happier. The chilling return of The Phenom (not to mention the equally cool reception by Triple H) and the duel between animal-free eating habits and a substance-free lifestyle got social media savvy squared circle devotees to "check in" while checking out the action.

For nearly a year, WWE fans have been asking, "where is The Undertaker?" On Raw SuperShow, a series of ominous gongs harkened the reemergence of The Phenom after long last. It would appear the bell yet again tolls for The Game, who came face to face with the ring's grim reaper in a fashion not unlike one year ago when roles were reversed and Triple H wordlessly summoned Undertaker to a clash at WrestleMania. (WATCH) Just as WWE EVP and Interim Raw GM John Laurinaitis was about to be demoted on live TV, The Deadman stepped forth from the Netherworld to render a clear challenge to The King of Kings ... who simply walked away.

Is The Undertaker truly interested in a rematch on The Grandest Stage of Them All or did The Deadman actually just save Laurinaitis from being "future endeavored" by The Game? If it's all about WrestleMania, will the Chief Operating Officer - now a finely manicured, well pressed "suit" type - really be able to ignore the iconic, streak-bearing Demon from Death Valley?

@brogsxx: NO WAY!!! Undertaker is back, oh my freeeeking goddddddd!!! #Raw

@Scotty_McTweety: @WWERawGM Ironic that undertaker seems to have saved your job on #Raw from certain death.

@FixinAHole: #Raw thoughts Undertaker gave me chills at first gong! so it looks like a WM rematch why does HHH want to be a WM victim a third time

@jimbodude316: #undertaker #tripleh for #wrestlemania28. End the streak? I think so! #raw

@seventeenblack: Wouldn't it be fun it the Undertaker came back in a new role as the wacky GM? #wwe #raw

@ActionTilson: Wrong time for the Undertaker! Interrupting the segment of Triple H & John I wanted Laurinaitis to be shown being sacked! #WWE #Raw

@GreezyAce: So I take it that John Laurinaitis is still running #RAW seeing as Triple H was interrupted by The Undertaker when he was gonna fire Johnny 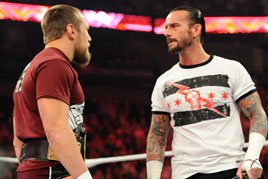 While the WWE Universe stands divided in the rapidly approaching WrestleMania XXVIII collision between John Cena and The Rock, even more polarizing contention arose between vegans and straight edge sects of WWE fandom on Monday. Sure, WWE Champion CM Punk and World Heavyweight Champion Daniel Bryan squared off in a technical bout that made wrestling purists salivate. But aside from their Champion vs. Champion Match itself, the two sparred verbally while extolling the virtues of their respective lifestyles - the alcohol, tobacco and drug-free straight edge Punk and the vegan Bryan, who abstains from eating anything derived from an animal. In other words, "I'll have a ginger ale" and "hold the cheese," respectively.

The personal policies on consumption aside, their veritable dream match was as hotly contested as expected until Chris Jericho "trolled" harder than before by interrupting the bout, first assaulting SmackDown's champion and then leveling Punk with the Codebreaker. (WATCH) "The end of the world" class match, is more like it.

@27Dannielle: Loved the bit backstage Punk & Bryan talking about what a vegan is & what Straight Edge is :) #RAW

@Mari_ayvey: Both are best!! RT @WWEUniverse: #StraightEdge vs. #Vegan ... who you got? #Raw #WWE #BestInTheWorld

@notPrecious: Well, looks like @IAmJericho is neither straight edge, or vegan. #RAW @WWE

@HaydzzP: Daniel Bryan's a Vegan who wrestles... His diet must be very unique #Raw

@rybask: Champion vs. Champion? Will the vegan powers overcome Punk and that Pepsi tattoo? #raw

@nacgator: I am not straight edge nor am I a vegan. I got nothing here. #Raw

@MadnNeS12: Wow what a show I love it I love taker return and jericho attacking punk #Raw @WWE 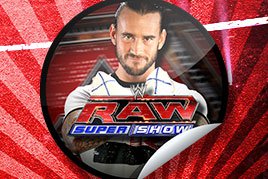 Did you get your sticker while tuning in on Monday night? Kicking off this past weekend with Royal Rumble then continuing on Raw, WWE's newest team-up with GetGlue allows viewers to "check in" to WWE programming and unlock official stickers (both virtual and printed) on the world's No. 1 social entertainment check-in website. (FULL DETAILS) Naturally,  you can share their newly achieved stickers on Facebook and Twitter, which is where the most devout WWE fans showed off their GetGlue badges of honor, featuring CM Punk (for Raw check-ins) and Santino Marella (for Rumble). Let's just say there were quite a few Straight Edge Superstar stickers going around the web on Monday night.

@WWEChamber_: Check in NOW on @GetGlue for @WWE #Raw to get your collectible @CMPunk Raw Sticker! #BestInTheWorld

@SullivanBooks: Mike Tyson is one of the most deserving members of the celebrity wing of the Hall of Fame. Makes sense. #WWE #Raw

@theangrychild: Cena is slowly embracing the hate the wheels are turning mwahahahahaha >:) #RAW

@BrockK: I'm glad @TrueKofi won his match against @mikethemiz. Kofi deserves to be in the uppercard already. No paint needed this time. #RAW'

@DominickDeNiro: @WWE What...Kofi Kingston is supposed to be the Riddler now? #Raw

@Sam_1541: #RAW John cena took Kane down, orton looked as hot as ever, johnnie boy is a goner. Yeah :) raw was sick tonight!

@MeliMelissax3: I have to get that Randy Orton Magazine... definitely going to go look for it tomorrow. #raw